SEOUL, June 18 (Yonhap) -- Two of the four North Korean fishermen rescued from the East Sea last week expressed a desire to defect to South Korea, while the two others were sent back to the North according to their wishes, the unification ministry said Tuesday.

South Korea returned the two crew members at the border village of Panmunjom earlier in the day after notifying the North of the incident via their joint liaison office in Kaesong on Monday, a ministry official said.

"Based on their free will, two have clearly expressed their intent to return and the other two said they want to stay," the official said.

Those who were returned are in their 30s and 50s, the official said, declining to provide further details on those who opted to stay.

The boat was discarded at the consent of the captain, according to the official. 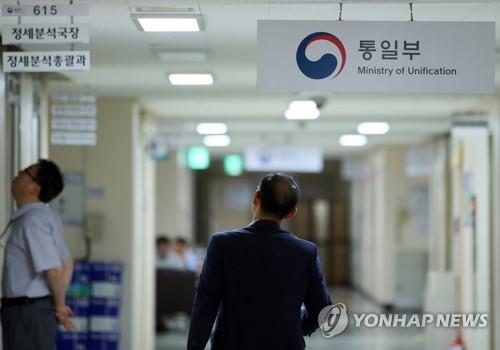 Their boat, known to be a 2-ton wooden one, was found adrift in waters near the port of the east coast city of Samcheok on Saturday morning after an engine failure. The site was about 150 kilometers south of the Northern Limit Line, the de facto maritime border between the two Koreas.

According to related authorities, the boat was found quite close to a seawall after drifting undetected across the maritime border, and a civilian first spotted it with his naked eye and reported it to the Coast Guard.

Such circumstances have sparked criticism that maritime border defense appears to have loosened.

Seoul's Joint Chiefs of Staff (JCS) has said its overall coastal and maritime defense operations had proceeded normally at that time and detecting small wooden boats often has some limits in accordance with weather conditions, among other things.

Acknowledging, however, that its radar operation system has "elements that need to be complemented," the military vowed to come up with measures, including the improvement of its radar and other surveillance system in order to prevent recurrences.

It was the second time in less than a week that a North Korean fishing boat has been rescued in the South.

Last Tuesday, six North Korean crew members on another fishing boat were found stranded south of the NLL in the East Sea and were sent back home on humanitarian grounds.

In Tuesday's case, the North asked the South via a naval hotline for help in rescuing the boat.