With the appointment, Stray Kids will join the Korean Culture and Information Service's various events over the following year to promote the global image of South Korea as well as its increasingly popular cultural content, known as hallyu, according to the agency.

The organization under the Ministry of Culture, Sports and Tourism has worked with other high-profile boy bands -- BTS in 2016, EXO in 2017 and WINNER in 2018 -- to promote the global content competition event it hosts every year.

But it's the first time a K-pop band has been officially named as the government body's honorary ambassador, it said.

The news came one day before the band was to drop its new album "Cle 2: Yellow Wood," whose main track is "Unveil: Track."

Debuting in 2018, Stray Kids dominated the scene for K-pop rookies last year and emerged as one of the most promising young K-pop bands of late.

Kim Tae-hoon, the head of the Korean Culture and Information Service, said "I hope young people around the world can become more familiar with Korea and step up their interest in the country through Stray Kids." 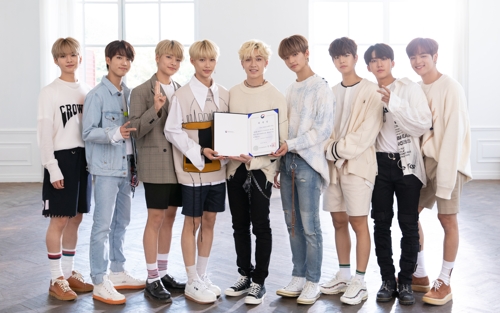