(Editor's Note: This is the sixth installment in a series of Yonhap interviews with key officials on South Korea's major policies)
By Koh Byung-joon and Choi Soo-hyang

SEOUL, June 20 (Yonhap) -- South Korea is pushing to hold an inter-Korean summit "before or after" next week's Group of 20 meeting of global leaders in order to help break the impasse in nuclear talks between Washington and Pyongyang, Vice Unification Minister Suh Ho said.

In an interview held on Monday with Yonhap New Agency, Suh also said that Seoul needs to come up with a wise solution to resume such cross-border economic projects as the now-shuttered industrial complex and tours to Mount Kumgang in the process of North Korea's denuclearization.

"The G-20 meeting is slated for later this month, which will be followed by a summit between South Korea and the U.S. The government will push to make an inter-Korean summit take place either before or after such big events," Suh said during his first media inteview since taking office last month.

President Moon Jae-in has repeatedly said in recent weeks that he wants to meet with North Korean leader Kim Jong-un and that it would be better if such a meeting takes place before his planned summit with U.S. President Donald Trump in Seoul.

Trump is scheduled to visit the South following the G-20 summit in Japan on June 28-29.

Moon hopes to use a new meeting with Kim, which would be their fourth summit since last year, to help get the stalled nuclear negotiations between Pyongyang and Washington moving again after a monthslong lull in the wake of the breakdown of February's talks between Trump and Kim.

The lack of progress in the nuclear talks has also been taking a toll on inter-Korean relations as Pyongyang remains unresponsive to Seoul's push for cross-border cooperative projects. Nor has Pyongyang responded to Seoul's offer for dialogue. 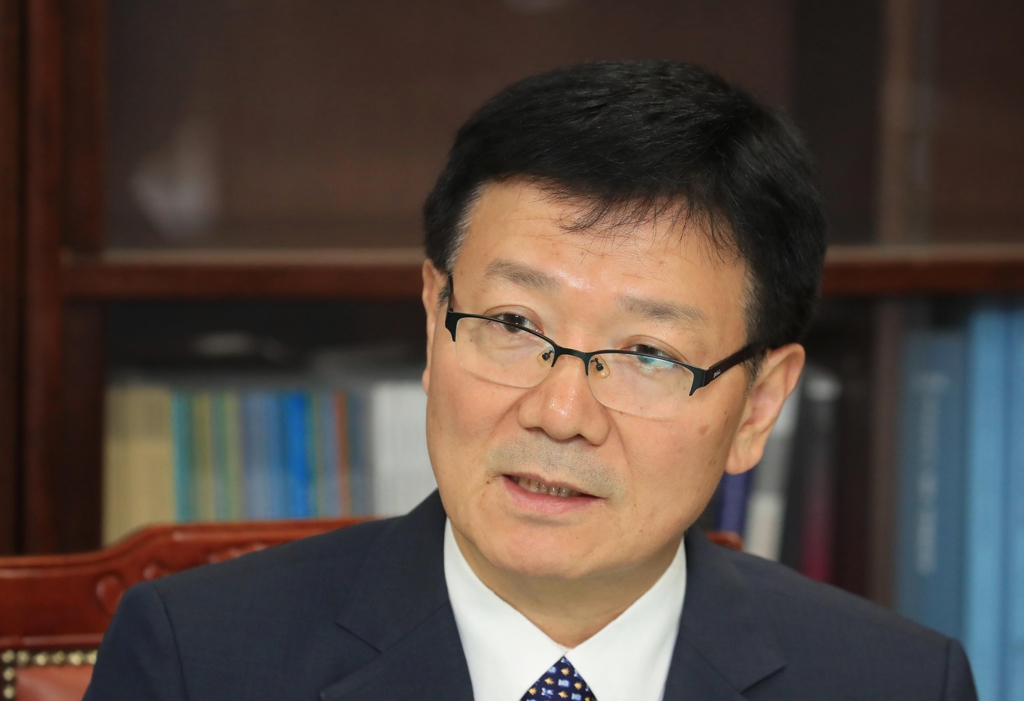 Some positive signals have been detected in recent weeks for inter-Korean ties and denuclearization talks.

Trump said last week that he had received what he called a "beautiful" and "very warm" letter from North Korean leader Kim, emphasizing that the relationship between them remains strong and that "something will happen that's going to be very positive."

Last Wednesday, Kim sent a condolence message and flowers through the truce village of Panmunjom for the death of late former first lady Lee Hee-ho. The message and wreath were delivered by the North Korean leader's only sister, Kim Yo-jong.

Suh was one of the South Korean officials who traveled to Panmunjom to accept them from her.

"It was for delivering a condolence message and flowers so we did not talk about anything other than that, but I think (the meeting) still carries a significant and symbolic meaning itself," he said in response to a question as to whether he mentioned the summit issue during his meeting with Kim's sister.

Touching on cross-border issues, Suh said that the now-shuttered inter-Korean industrial complex in North Korea's border town of Kaesong and tours to Mount Kumgang are "very important" in advancing relations between the two sides.

He said that Seoul will have to find a "wise solution" to get the projects up and running again in accordance with progress in denuclearization efforts.

In their summit in September, Moon and Kim agreed to resume the Kaesong industrial park and Mount Kumgang tours as soon as the right "conditions" are prepared.

Washington, however, has been opposed to their resumption on apparent worries that it could undermine the global sanctions regime on Pyongyang while little progress has been made in denuclearization talks.

In a recent meeting with South Korean businesspeople who used to operate factories in the Kaesong complex, a ranking U.S. Democratic congressman expressed doubt that the inter-Korean industrial complex in North Korea will reopen before the regime's denuclearization.

"It would not be easy to resume the operation of the Kaesong complex and Mount Kumgang tours at a time when there is little progress in denuclearization talks," Suh said. "(But) I think it is a matter that needs to be discussed between South Korea and the U.S. whether we have to see the creation of 'conditions' as complete denuclearization or the denuclearization process."

"I think that it does not necessarily mean complete denuclearization," he added. "I think we need to find an exquisite procedure with regard to resumption of the Kaesong complex and Mount Kumgang tours in the process of denuclearization."

The Kaesong industrial complex came to a halt in 2016 after the North's nuclear and missile provocations. The Mount Kumgang tour program was suspended in 2008 after a South Korean woman was killed by a North Korean guard.

Acknowledging the limits posed by global sanctions in seeking active cross-border exchange, Suh said that it is necessary to seek cross-border projects in the so-called white zone not subject to restrictions such as non-economic cooperation and humanitarian assistance.

"Cooperation in forestry is not an economic project. Food assistance is a humanitarian issue, which belongs to the white zone that has nothing to do with sanctions," he said, adding that the government will work to find more white-zone cooperative projects going forward.

(Policy Interview) S. Korea pushes for inter-Korean summit before or after G-20 meeting

(Policy Interview) S. Korea pushes for inter-Korean summit before or after G-20 meeting