Concerns and criticism have mounted over possible loopholes in the military's maritime surveillance capabilities after the wooden boat carrying four North Koreans arrived at the port in the east coast city of Samcheok, Gangwon Province, on Saturday morning.

The site was around 130 kilometers south of the Northern Limit Line (NLL), the de facto maritime border between the two Koreas.

Calling the case "a very grave situation," Jeong demanded that the military tighten operational and work discipline, and proactively push for measures to prevent recurrences of such incidents, according to the defense ministry.

"We have to look thoroughly into how border surveillance operations are going and whoever is found responsible in this process should be sternly held to account," Jeong said during a biannual meeting of top military commanders. 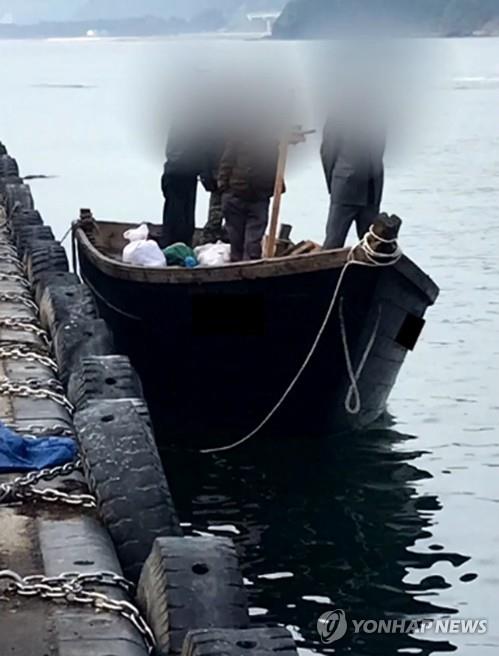 According to military authorities, the 1.8-ton wooden boat with a 28-horsepower engine left the North's Hamgyong Province on June 9 and crossed the NLL unchecked three days later.

After moving further south for the following two days, they turned the engine off late Friday and stayed overnight at sea until dawn. The boat then began moving to the port and reached the dock at around 6:20 a.m. on Saturday.

Authorities had earlier said that the boat was stranded in the East Sea due to an engine failure and it was rescued by the South's Coast Guard. But it turned out that the boat had no such trouble, raising suspicions of a cover-up.

The circumstances have sparked suspicions that they intentionally crossed the border for defection.

During their interrogation by related authorities, two of them in fact said that they took the boat to defect to the South, according to the military.

"An initial probe found that they are all civilians, but a further probe is needed to exactly learn their identities," a military officer said, adding that it is not known if they were fishermen or not.

One of them donned a camouflage military uniform, but the authorities have not found any suspicion of espionage so far, another officer noted.

The boat was to be discarded at the consent of the captain, but it has been kept by the Navy intact, according to the military. 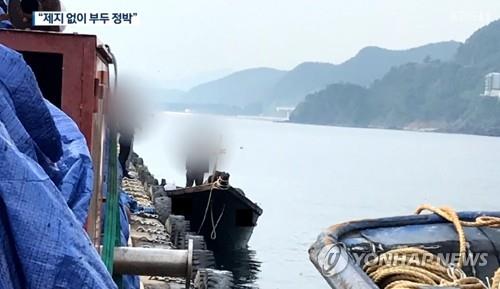 The defense minister called for a staunch readiness posture "regardless of" the inter-Korean military accord signed in September last year that calls for a series of trust-building and arms control measures under a broader scheme to halt all hostile acts against each other.

Under the accord, the two Koreas set up a buffer zone along the NLL to prevent accidental maritime clashes. Some critics have said such a measure would cause South Korea's maritime border defense to have loosened.

In response to simmering criticism, the Joint Chiefs of Staff (JCS) has said that its overall coastal and maritime defense operations had proceeded normally at that time, and detecting small wooden boats often has some limits depending on weather and other conditions.

"Surveillance systems usually spot vessels of iron or steel properties, and it is not easy to find slowly moving wooden objects at sea," a JCS officer said, adding the height of the waves on the day was nearly the same as that of the ship, making it difficult for the military to detect it.

Acknowledging that its radar operation system has "elements that need to be complemented," the Joint Chiefs of Staff (JCS) vowed to come up with measures, including the improvement of its radar and other surveillance systems, in order to prevent recurrences.

The case came less than a week after six North Korean crew members on another fishing boat were found stranded south of the NLL in the East Sea on June 11 and were sent back home on humanitarian grounds.

At that time, the North asked the South via a naval hotline for help in rescuing the boat.