SEOUL, June 19 (Yonhap) -- Korean Air Lines Co. said Wednesday it has signed a deal to purchase 30 B787 passenger jets to modernize its fleet, with delivery set to begin next year.

Korean Air signed a memorandum of understanding with Boeing to purchase 20 B787-10 planes and 10 B787-9s at the 53rd International Paris Air Show, the company said in a statement.

"The upcoming wide-body planes will be replacing aging models of the carrier's existing A330, B777 and B747 currently in operation," it said.

The delivery of the B787-9s will begin in 2020 and that of the B787-10s starts the following year, the company said, without giving the contract value.

The 68-meter-long 787-10 is the largest version of the 787 family, 5 meters longer than the 787-9, and with 40 more seats it can accommodate up to 330 passengers. It also allows operators to achieve 25 percent better fuel efficiency per seat compared to previous planes, according to Korean Air Lines.

Only a few carriers operate B787-10s -- Singapore Airlines, Etihad Airways, United Airlines and All Nippon Airways. Korean Air is the first airline in South Korea to add the B787-10 to its fleet.

With the B787 orders, the Korean national flag carrier will be operating 40 B787 Dreamliners, including 10 existing ones. Currently, it has a fleet of 168 planes. 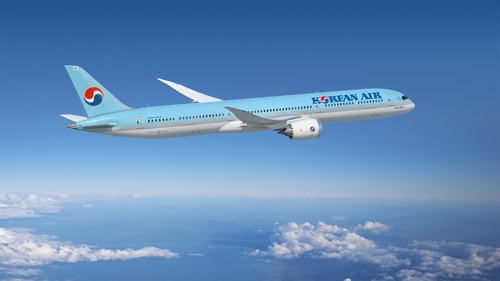