SEOUL, June 19 (Yonhap) -- When Xi Jinping took power in 2013, North Korea was increasingly becoming a liability for the Chinese leader, with its relentless provocations destabilizing the region, justifying U.S. military presence on the peninsula and bolstering America's trilateral cooperation with South Korea and Japan.

But amid an intensifying Sino-U.S. rivalry, Xi appears to be recalibrating the strategic value of the communist ally as seen in his beefed-up diplomatic outreach that will culminate in his trip to Pyongyang this week.

Xi plans to make his first visit to the North as China's paramount leader on Thursday -- a trip that has sparked a slew of geopolitical questions, including one about its ramifications for ongoing diplomacy on the North's denuclearization and a lasting peace on the peninsula.

The trip comes against the backdrop of an increasingly acrimonious competition between Washington and Beijing over trade, technology, maritime security and other sensitive issues that have put their partner countries on edge. 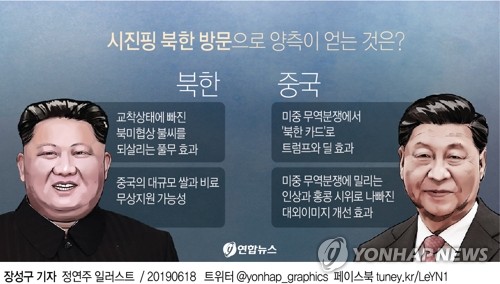 "Amid Washington's engagement with Pyongyang, voices within Beijing that the North is a strategic liability for China appear to be weakening, while claims that the North is a geopolitical asset have been bolstered," Nam Chang-hee, a professor of international politics at Inha University, said.

"Xi's planned trip to Pyongyang after four summits with the North in Beijing hints that the Chinese president is itching for deeper ties with Pyongyang and for the reassertion of its geopolitical stake on the peninsula," he added.

In the first several years of his presidency, Xi confronted a dizzying array of North Korean provocations, including nuclear and long-range missile tests -- all in defiance of Beijing's warnings and admonishments.

The North's destabilizing acts were a serious distraction when Xi was saddled with a plethora of challenges from both home and abroad, including a slowing economy, income disparities, regional development gaps, political corruption and maritime territorial disputes.

Such acts also worsened the regional security conditions for China as they led the South, the U.S. and Japan to firm up their three-way security collaboration, long anathema to Beijing.

At that time, Pyongyang's saber-rattling gave fodder for heated debates among polemic writers, with some warning that Beijing could even abandon Pyongyang in pursuit of a greater national interest should the North persist in its pugnacious behavior.

The North's provocations also triggered strident calls for China to exert its influence to rein in the North, as Washington repeatedly accentuated Beijing's role as a responsible "regional stakeholder."

Giving in to the pressure, Beijing has become an enforcer of the international sanctions against the North, further aggravating tensions with the impoverished ally and eroding the traditional fraternal bond with it.

In an apparent message against the North's provocations, Xi was even seen as steering a middle course between Seoul and Pyongyang in an approach that some analysts said keeps "equal distance" between the two Koreas.

Xi's diplomatic pendulum, however, appears to have recently swung toward Pyongyang amid Washington's diplomatic engagement, which has fanned worries that China's ally, the North, could be tilting to the U.S.

China's seeming recalibration of the North's value reflects escalating tensions with the U.S., which have been in part caused by an assertive foreign policy that differs from Xi's predecessors' stance of staying low-key and biding their time until China's clout matches that of its superpower rival.

Xi has been aggressively doubling down on China's territorial claims in the lion's share of the South China Sea by establishing artificial islands capable of military operations, accelerating military modernization and seeking to build new global institutions such as the Asia Infrastructure Development Bank, which is seen as a counterweight to U.S.-led bodies like the World Bank.

He has also been pushing for the One Belt One Road initiative, widely seen as a scheme for global preeminence. The initiative seeks to connect China with Southeast Asia, Central Asia, Europe and Africa through "land and maritime silk roads."

Geopolitical tensions have further escalated in recent months as the U.S. has demanded a sweeping change in what it calls China's unfair trade practices, such as providing state subsidies to high-tech industries and requiring technology transfers for greater market access.

The U.S. pressure on China has also intensified on the security front.

In its recent report on a comprehensive strategy to ensure a "free, open" Indo-Pacific, the U.S. Department of Defense accused China of being a "revisionist power" seeking to alter what it calls the rules-based order.

The report also drew the ire of Beijing by listing Taiwan, which China regards as part of its territory under its "One China" policy, as a group of partner "countries" for America's Indo-Pacific strategy.

Against this backdrop, Xi appears to have started to re-examine the geopolitical value of North Korea, analysts noted.

"Given various circumstances, China appears bound to continue the taut relationship with the U.S. and in that process, China might think improved relations with the North serve its national interests," said Suh Jin-young, professor emeritus at Korea University.

"While reevaluating the strategic value of the North, China would think about how to shape the relationship with the North in a way that best promotes its interests," he added.

In a rare contribution to the Rodong Sinmun, the North's main newspaper, Xi said that he would try to contribute to making progress in the nuclear talks between Washington and Pyongyang that have been at an impasse since the two countries' no-deal summit in Hanoi in February.

As to the purpose of Xi's trip to the North, experts' predictions varied.

Some argued that Xi could use his trip to ensure that the North remains in China's orbit through pledges of economic, political and diplomatic assistance short of outwardly contravening the global sanctions regime.

Others predicted that Xi could persuade Kim to take substantive denuclearization steps so as to ease China's geopolitical tensions with the U.S., particularly ahead of his planned talks with Trump on the sidelines of the Group of 20 summit in Osaka, Japan, on June 28 and 29.

Kim Tae-hyun, professor of international politics at Chung-Ang University, said that the likelihood of Kim taking steps to reduce the North's autonomy and put his country under China's control are slim.

(News Focus) N. Korea, once a liability, emerges as geopolitical asset for Xi

(News Focus) N. Korea, once a liability, emerges as geopolitical asset for Xi