(ATTN: RECASTS headline, throughout with summit remarks)
By Koh Byung-joon and Song Sang-ho

SEOUL/BEIJING, June 20 (Yonhap) -- North Korean leader Kim Jong-un said Thursday he will maintain "patience" in efforts to resolve the Korean Peninsula issue, in an expression of willingness to continue nuclear talks despite the lack of "active response" to Pyongyang's efforts to ease tensions.

Kim made the remark during his summit with Chinese President Xi Jinping, who arrived in Pyongyang earlier in the day on a landmark two-day trip to his communist ally.

"Over the past year, North Korea has taken active steps to ease tensions, but they have failed to draw active response from the relevant country. This was not what I wanted to see," Kim was quoted as saying by China's state-run CCTV.

The relevant country apparently refers to the United States.

"The DPRK will maintain patience," Kim said. "I hope the relevant country will see the DPRK face-to-face and address each other's issues of interest so as to resolve the Korean Peninsula issue."

Xi pledged to play an active role in realizing the denuclearization of the Korean Peninsula and voiced his support for the "political" resolution of peninsula issues. He also said that China will help address North Korea's security concerns.

"China will provide every possible support for North Korea to address security and development issues of reasonable concern," Xi was quoted as saying.

The summit was held amid stalled denuclearization talks between Pyongyang and Washington since their second summit in February ended without a deal.

The February summit collapsed as Pyongyang wanted sanctions relief as a corresponding measure in exchange for dismantling its Yongbyon nuclear complex, while Washington insisted that sanctions should remain in place until the North completely gives up its nuclear weapons program. 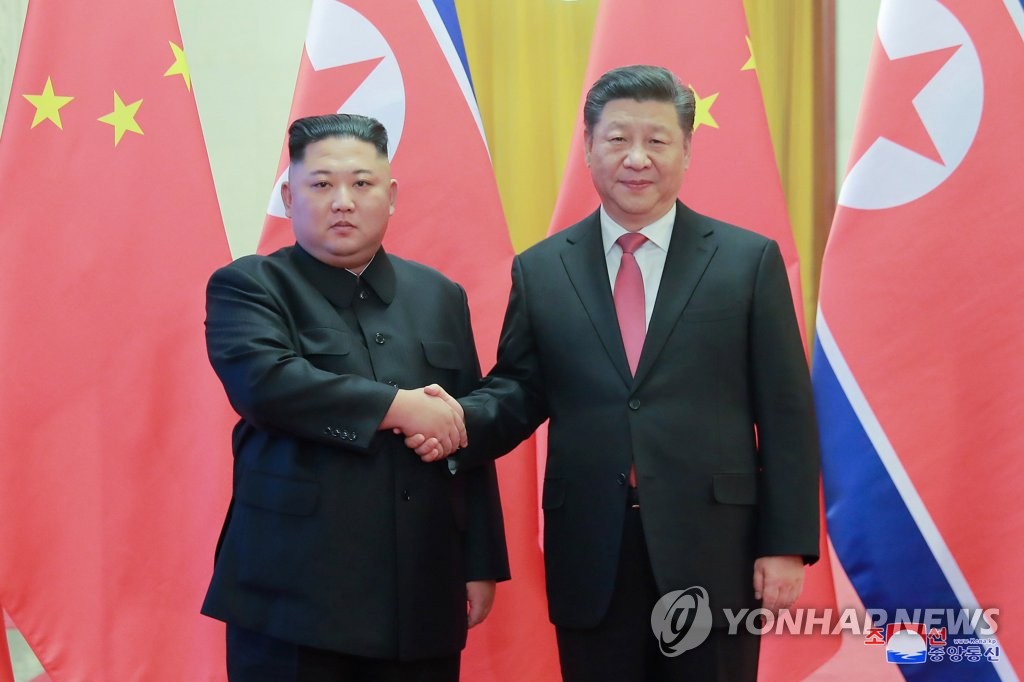 The summit was held after Xi and his wife, Peng Liyuan, arrived at Pyongyang's Sunan International Airport earlier in the day and were greeted by the North's leader and his wife, Ri Sol-ju, the People's Daily reported. Close to 10,000 North Koreans waved flowers and chanted welcoming slogans at the airport.

Xi and Kim reviewed an honor guard, with the Chinese leader greeted with a 21-gun salute. The North's military band performed national anthems of the countries.

Hundreds of thousands of people lined the streets of Pyongyang, waving flowers and the flags of the countries and chanting slogans, such as "DPRK-China friendship," as a motorcade carrying the two leaders in a roofless vehicle headed to central Pyongyang.

They left for the square of the Kumsusan Palace of the Sun, the mausoleum commemorating the North's former leaders, where another lavish welcoming ceremony was reportedly held.

North Korean media has yet to report on Xi's arrival in Pyongyang and the summit between the leaders.

In an op-ed piece in the Rodong Sinmun, the North's official newspaper, on Wednesday, Xi vowed to play a greater role in helping make progress in negotiations on Korean Peninsula issues and addressing Pyongyang's "reasonable" demands through dialogue, apparently referring to the nuclear standoff between the U.S. and the North.