In the morning, U.S. Special Representative for North Korea Stephen Biegun used a public speech to emphasize that the "door is wide open" to negotiations, and without preconditions.

"We expect and hope that in the not too distant future we will be reengaged in this process in a substantive way," he told an event at the Atlantic Council think tank, noting the absence of working-level talks since the no-deal summit in February between U.S. President Donald Trump and North Korean leader Kim Jong-un. 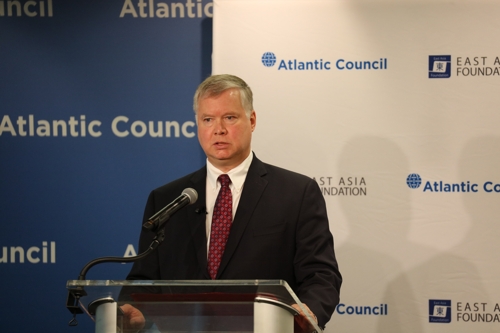 By afternoon, the U.S. Treasury Department rolled out new sanctions against North Korea, this time targeting a Russian financial firm it accused of providing services to Pyongyang in support of the regime's nuclear weapons program.

It warned that those who "attempt to circumvent our authorities" to provide the North with access to the global financial market "expose themselves to significant sanctions risk."

The dual action came amid renewed hope for a resumption of negotiations in the wake of what Trump described as a "beautiful" letter from Kim last week.

It also coincided with Chinese President Xi Jinping's upcoming trip to North Korea on Thursday and Friday, which the U.S. is certain to watch carefully for its impact on both the nuclear negotiations and the ongoing trade talks between Washington and Beijing.

The U.S. has insisted on maintaining a two-track approach of dialogue and sanctions, but it's rare for both messages to be sent the same day.

"We want to be very careful in the messages we send," Biegun said before the sanctions were announced. "You asked if we are setting conditions. We are not."

Still, the envoy noted that North Korea's negotiators must be prepared to discuss the issue of denuclearization at working-level talks with the U.S.

"It's definitely the pathway to success," he said.

The February summit between Kim and Trump in Vietnam ended abruptly without a deal due to gaps over the scope of North Korea's denuclearization and sanctions relief from the U.S.

Biegun said that the North Korean negotiators were not empowered in pre-summit talks to discuss denuclearization and could only address the other issues of improving bilateral ties agreed to at the first summit in Singapore last June.

"Both sides understand the need for a flexible approach," Biegun noted.

Some expect new momentum to be created following a series of meetings involving South Korean President Moon Jae-in, Xi and Trump at the Group of 20 summit in Japan next week, as well as Trump's visit to Seoul for talks with Moon after that.

Speaking alongside Biegun, South Korea's top nuclear envoy, Lee Do-hoon, urged the North to hold a summit with Moon ahead of Trump's trip to Korea.

Moon and Kim have held three summits since last year and plans for a fourth summit have not yet materialized due to the deadlock in U.S.-North Korea negotiations.

He urged the North to "grab the opportunity when it presents itself," citing Trump's promise to provide economic aid in return for denuclearization.

He also noted while the South Korean government will continue to implement sanctions on the North until complete denuclearization has been achieved, sanctions are not a "magical solution."

"They are merely a tool for bringing about the solution through negotiations," the envoy said. The last time the U.S. announced North Korea-related sanctions was in March, when the Treasury targeted two Chinese shipping firms it accused of helping the North evade sanctions.

Trump sparked confusion a day later by tweeting that he had ordered the withdrawal of additional sanctions, but those measures have so far remained in place.

In May, North Korea fired a barrage of short-range missiles and projectiles into the sea in apparent frustration over the impasse with the U.S.

The U.S. then announced that it had for the first time seized a North Korean vessel, the Wise Honest, which was suspected of transferring coal and machinery in violation of sanctions on the regime.