SEOUL, June 20 (Yonhap) -- A U.S. reconnaissance plane recently flew over Seoul and surrounding regions, an aviation tracker has said, on an apparent mission to collect intelligence regarding North Korea.

The plane, believed to be an RC-135W Rivet Joint, was detected in the skies above South Korea's capital city and the surrounding province of Gyeonggi on Wednesday, Aircraft Spots posted on Twitter.

The aircraft last undertook such operations over the same region on June 11.

Xi is scheduled to arrive in Pyongyang on Thursday for his two-day trip there, the first visit to the North by a Chinese head of state in 14 years.

Stepping up its surveillance of North Korea following its weapons tests involving short-range missiles early May, the U.S. has flown the reconnaissance plane over Seoul and its surrounding areas more often in recent weeks.

The aircraft used to occasionally fly over areas near Seoul around the time the North fired a string of ballistic missiles in 2017. But last year when the current peace process involving North Korea began, it was usually flown over the Yellow Sea. 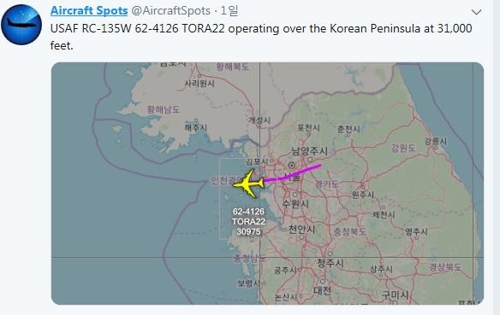