The replacement of key presidential economic aides is apparently intended to boost policy coordination with government agencies as the Korean economy slows down in the face of heightened uncertainty such as the trade war between the United States and China.

The move appears to aim to hold their predecessors accountable for the failure to prop up the economy. It has been less than one year since Kim and Yoon were appointed to the posts.

As he entered his third year in office earlier this year, Moon called for efforts to yield visible economic achievements, but the economic data remain gloomy.

Moon is pursuing his signature income-driven growth policy, which is aimed at spurring growth by increasing household income and consumption.

But the job market remains tepid amid economic uncertainty and steep hikes in the minimum wage.

In April, the Bank of Korea, the country's central bank, cut its economic growth outlook for 2019 to 2.5 percent from 2.6 percent, citing economic uncertainties over trade tensions and weakening exports.

Kim Sang-jo, 56, the new presidential secretary for policy, has been serving as the first chairman of the Fair Trade Commission under the Moon administration. He served as a professor and also worked at a civic group.

Lee, 53, began his career as a public servant at the finance ministry and worked as a presidential aide on jobs from 2017-2018.

The presidential office said Kim's experience of working in academia and in the civilian sector will help him take into account the plight of ordinary people in setting policies.

"There is also a need to strengthen (the realization) of a fair economy, one of the three pillars (of Moon's economic policy)," Cheong Wa Dae spokesperson Ko Min-jung said.

Ko said Lee is expected to play a role in helping the Korean economy navigate the heightened economic uncertainties.

But she rejected speculation that the replacement constituted censure of Kim and Yoon, the predecessors of the new secretaries, citing their contribution to implementing the Moon government's core policy line. 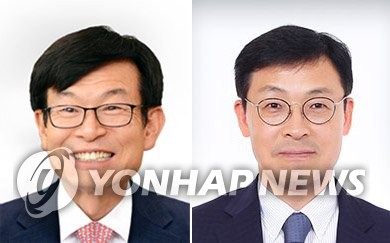