SEOUL, June 21 (Yonhap) -- Chinese President Xi Jinping's renewed commitment this week to peace on the Korean Peninsula is expected to keep North Korea on the negotiating track and raises hopes for progress in its denuclearization, though doubts linger over his geopolitical intentions.

During his summit with North Korean leader Kim Jong-un in Pyongyang on Thursday, Xi reaffirmed Beijing's support for the "political settlement" of the North's nuclear quandary and pledged to play a "positive and constructive" role in its denuclearization.

The commitment came amid growing concerns that a drawn-out nuclear standoff between Washington and Pyongyang could imperil their rare summit-driven diplomacy for a lasting peace regime on the peninsula.

"The international community hopes that talks between the DPRK and the United States will move forward and bear fruit," China's Xinhua News Agency quoted Xi as saying. DPRK stands for the North's official name, the Democratic People's Republic of Korea. 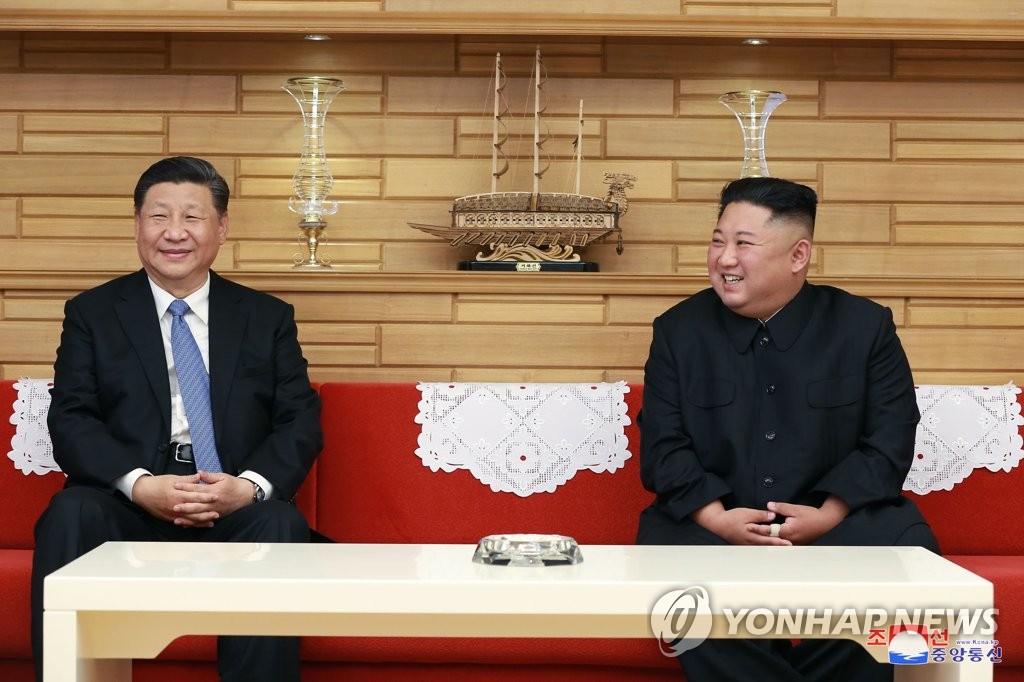 He added that China is willing to strengthen coordination and cooperation with the North, as well as other relevant parties, and play a positive and constructive role in achieving denuclearization of the peninsula and long-term stability in the region.

Kim said in turn that his country is willing to "stay patient" and hopes that the relevant party will work with the North to seek solutions that "accommodate each other's legitimate concerns and push for results from the dialogue process."

Xi's emphasis on China's role for the North's denuclearization fueled concerns that Beijing could inject fresh geopolitical complexities into the already stalemated denuclearization talks between Washington and Pyongyang.

But it could also have a silver lining for the overall process to foster peace on the peninsula as Beijing's call for regional stability could help prevent Pyongyang from veering toward a provocative tack, analysts said.

"At the center of China's pledge to undertake a constructive role for peace on the peninsula is a warning against North Korea's military provocations. It is a message that the North should not make additional trouble," said Kim Heung-kyu, professor of Chinese diplomacy at Ajou University.

"Since the no-deal summit between U.S. President Donald Trump and Kim in Hanoi, chances have increased that the North could engage in provocations that could destabilize China's northeastern region and lead to a U.S. call for China (to rein in the North)," he added.

In an apparent show of its growing frustration over the deadlocked negotiations with the U.S., the North launched a fusillade of projectiles, including short-range missiles, last month, raising fears of its return to a confrontational approach.

But Kim's personal letter to Trump earlier this month in time for the first anniversary of their first summit in Singapore helped ease tensions and rekindled hopes for the resumption of negotiations between the two sides.

The impasse in the nuclear talks is attributable to their failure to bridge gaps over the scope of Pyongyang's denuclearization and Washington's corresponding measures, including its sanctions relief.

Xi's commitment to peace on the peninsula reaffirmed Beijing's considerable influence over its communist ally amid an intensifying Sino-U.S. rivalry over trade, technology, maritime security and other geopolitical fronts, analysts said.

That influence was evidenced by all the pomp and ceremony, and the outpouring of hundreds of thousands of North Korean citizens waving Chinese flags and chanting slogans for close bilateral ties Thursday, the first day of Xi's two-day trip to Pyongyang.

"During his summit, Xi might have wanted to reassert China's status as a crucial geopolitical stakeholder on the peninsula," said Nam Chang-hee, professor of international politics at Inha University.

"China's clout over the North might not be a dominant, critical source of leverage against the U.S., but it still can serve as a secondary diplomatic card when Beijing is struggling to navigate through the geopolitical landscape," he added.

Speculation has persisted that Xi could seize on China's clout over the North to strengthen his hands ahead of his talks with Trump on the sidelines of the Group of 20 summit in Osaka, Japan, next week.

For the North Korean leader, the summit with Xi served as a crucial chance to reconfirm Beijing's attention to Pyongyang's security concerns and highlight that Pyongyang has the powerful ally to fall back on should its nuclear negotiations with Washington go awry.

During the summit, Xi said that China is willing to provide assistance "within its capacity" for the North to address the North's "legitimate security and development concerns," and strengthen cooperation with the neighbor.

The impoverished state's lavish welcome ceremony for Xi underscored its eagerness to enlist China's backing in addressing its economic woes caused by natural disasters, as well as crippling international sanctions, and in leading nuclear negotiations on terms more favorable to its interests, analysts noted.

Xi's mantra of regional peace raised expectations that the North could return to nuclear talks with the U.S. U.S. chief nuclear envoy, Stephen Biegun, reportedly plans to visit Seoul this month, sparking speculation over the resumption of nuclear talks.