SEOUL, June 21 (Yonhap) -- A Seoul court on Friday issued an arrest warrant against the leader of the Korean Confederation of Trade Unions (KCTU), a militant labor umbrella group, on charges of masterminding assaults on police during outdoor rallies.

Kim Myeong-hwan, chairman of the KCTU, is accused of overseeing violent illegal acts during KCTU members' four protest rallies in front of the National Assembly compound on May 21 last year, as well as March 27 and April 2 and 3 this year. 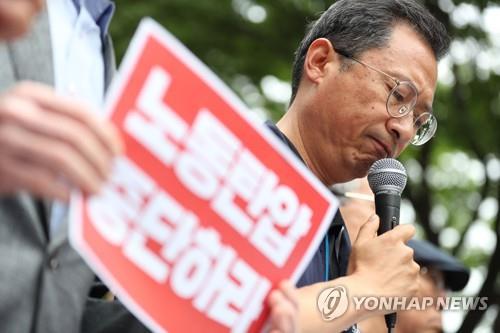 The Seoul Southern District Court cited a concern that he may flee when it issued the warrant.

During the protest rallies, labor activists knocked down parts of the fence surrounding the National Assembly in Seoul's Yeouido, assaulted police officers, destroyed police equipment and attempted to force their way into the compound illegally to block the passage of labor bills, including those calling for extending statutory flextime from three to six months to minimize side effects of the government's mandatory 52-hour workweek policy.

The KCTU chairman voluntarily underwent police questioning on June 7 and reportedly stated that he was broadly responsible for the violent protest rallies.

"The government has joined ultraright media and political parties in a problematic witch hunt against the KCTU," Kim said in the news conference.

"The Moon Jae-in government has finally requested an arrest warrant against me after giving up its will to respect labor and resolve low wages, long working hours and other labor problems," he said, vowing to continue to struggle against the government.

He then urged KCTU members to further fight to expand basic labor rights, raise the minimum wage to 10,000 won (US$8.60) per hour and carry out a general strike planned in July.