SEOUL, June 27 (Yonhap) -- Doing business in a legal gray area needs a lot of guts and an elaborate scheme, and that is especially so in South Korea's tightly regulated taxi industry, which sets high barriers for mobility startups seeking to enter the market without taxi licenses.

The latest major challenger is Tada (the Korean word for "ride"), which combed through the local regulations to find a loophole and launched a rental van-hailing service in late October.

The service, operated by VCNC, a subsidiary of car-sharing app SoCar, took advantage of an exception that allows the rental of 11- to 15-seat vans with a driver and sought out opportunities in the taxi industry, which is often criticized for reckless driving, rude drivers and selectively picking up passengers depending their destination.

As a result, Tada has rapidly expanded its presence in the Seoul metropolitan area, boasting over 600,000 users and 1,000 registered vehicles as of May. Nine out of 10 called the service again after their initial use, according to VCNC. 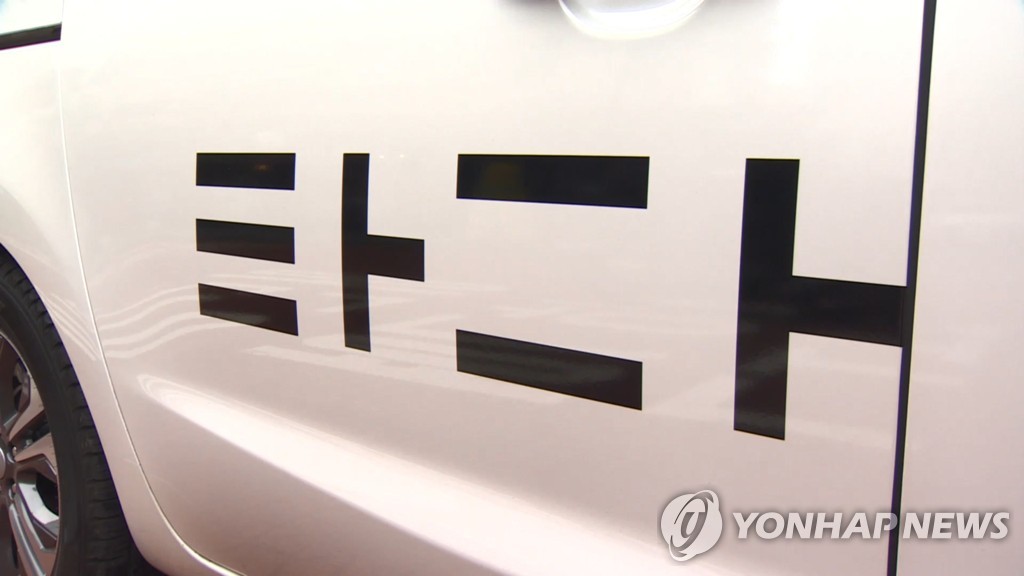 "Taxi or not, Tada offers a reliable ride to get around the city at reasonable prices, with clean interiors and polite drivers." Kim Ji-hyun, a 35-year-old office worker in Seoul said. "To me, it's just another app-based ride-hailing service. The biggest difference with taxis is that Tada's car is a Kia Carnival."

Although Tada set its prices higher than those of conventional taxis when it started the service last year, its fares are currently not much different from those of normal taxis in Seoul, which rose 18.6 percent to a starting rate of 3,800 won (US$3.3) in February.

In line with its rising popularity, Tada has become a new target of angry taxi drivers who accuse it of operating an "illegal taxi service" under a disguised name to threaten their livelihoods.

Taxi drivers have held street rallies and threatened legal action, like they did against other mobility sharing services, such as Uber and Kakao Mobility's carpool. A cabbie set himself on fire during a Seoul demonstration last month with the desperate message, "Tada OUT."

"Tada claims its service is legal, but it exploited the legal exception for a rental car that was originally designed to promote local tourism," Oh Young-jin, a spokesperson for the Seoul Private Taxi Association (SPTA), said. "Tada is just another cheating taxi service and the government should crack down on the illegal service."

Despite the attacks from the taxi drivers, Tada seems undaunted.

Based on its early success, Tada is preparing to launch a premium service by adding luxury vehicles to its platform to diversify its fleet. The company said it has been in negotiations with the Seoul city government with the goal of launching the new service later this month.

"While Tada has to buy new vehicles and hire drivers for the rental cars, the premium service is a platform business model that connects the incumbent taxis with passengers," said Yoon Na-young, a public relations official for SoCar. "The new service is aimed at collaborating with the existing mobility industry and diversifying the business portfolio."

However, the firm is expected to face an uphill battle for the new service given strong opposition from cabbies over its rental van service.

The premium service provides a platform for linking passengers and licensed taxis for a small brokerage fee, which is legal, but several taxi associations have been discouraging their members from joining hands with their "enemy." 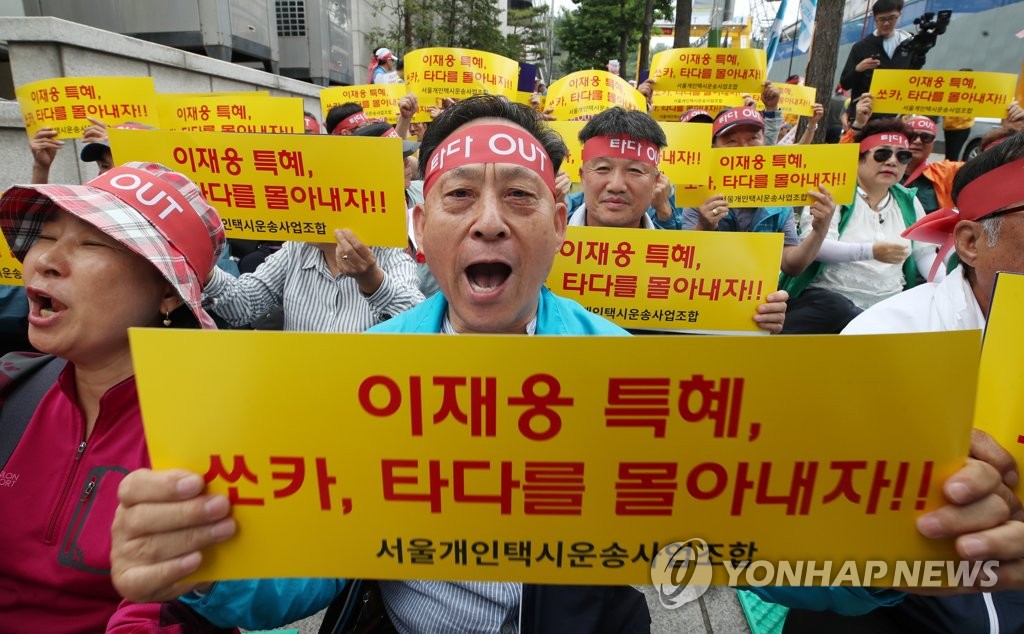 The deepening conflict shows no signs of cooling down because the government and lawmakers have been reluctant to step in to mediate a solution and reduce confusion among passengers.

Their dilemma is this: Outlawing Tada would hamper innovation among startups and draw a backlash from consumers, but allowing the rental taxis would open the floodgate to similar ride-sharing apps operating without permits. They fear it could eventually make it meaningless to maintain the current licensing system and the government-led pricing scheme.

While policymakers have remained on sidelines of the politically complicated issue, industry watchers say a court decision on Tada's fate could change the landscape of the country's taxi industry and mobility startups in the highly connected Asian nation.

"The government is in an awkward situation because banning Tada would go against its pledge of facilitating innovation among startups by reducing regulatory red tape," said Cha Doo-won, a researcher at the Korea Institute of S&T Evaluation and Planning.

"However, allowing Tada could cause a backlash from taxi associations with strong lobbying power. And the timing is not good, especially ahead of next year's elections."

Industry officials say the government's role is important in boosting innovation in a way that minimizes damage to the incumbents in the industry, and it is time to come up with a problem-solving mechanism for sectors faced with similar challenges.

"If Tada is illegal, the government should promptly stop the service. If the current regulations are considered irrelevant, it has to revise the law to reflect the new reality," said Kim Ki-young, the chief of Seoul Taxi Land, which provides a price chart for local taxi licenses.

"But the government is just waiting for a court decision, which could take several months. The government's inability to take action on Tada is worsening the situation."

Although a prolonged conflict could add uncertainty to the industry, the tug of war could provide a positive catalyst for the taxi market as industry players seek ways to come up with services that can resonate with the customers.

To survive the changing industry trends, taxi associations have vowed to improve quality of service and urged the government to ease existing regulations on the taxi industry to flexibly respond to market demand.

"Seeing the growing popularity of Tada, many taxi drivers have started to share the consensus that they need to provide a better service to win back customers," Oh said. "We are not opposed to fair, open competition. For that goal, the government needs to lower regulations on the taxi pricing system and licensing system, which has set barriers for young drivers."