SEOUL, June 24 (Yonhap) -- The prospects of Washington and Pyongyang resuming their nuclear talks are rising, as U.S. President Donald Trump and North Korean leader Kim Jong-un have exchanged personal letters while South Korea is poised to crank up mediation efforts.

The goodwill gestures by Trump and Kim appear to be paving an on-ramp for them to reenter negotiations after a monthslong hiatus, but whether they can come to fruition soon remains an open question due to gaps over a series of sticking points, analysts said.

On Sunday, the North's state media reported that Kim had received an "excellent" and "interesting" letter from Trump that he will "seriously contemplate."

Earlier this month, Trump got a letter from Kim, sparking speculation that the leaders will set in motion another round of "letter diplomacy" that Kim apparently used to smooth out difficulties ahead of his two summits with Trump in Singapore last June and in Hanoi in February.

The exchange of letters came before South Korean President Moon Jae-in and Trump hold a summit in Seoul to discuss the nuclear quandary following their attendance at the Group of 20 summit in Osaka, Japan, on Friday and Saturday. 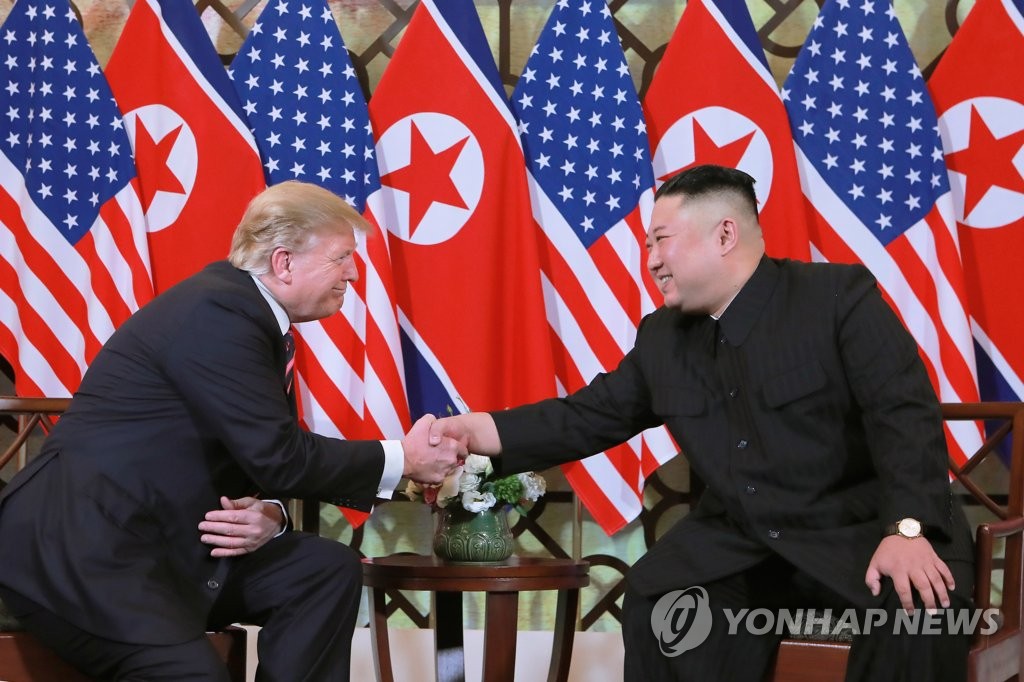 Park Won-gon, professor of international politics at Handong Global University, raised the possibility that in his letter to Kim, Trump might have proposed working-level talks with Pyongyang before their possible third summit.

"There is a likelihood of Trump suggesting working-level talks -- one reason why Kim called the letter interesting and said he would seriously contemplate it," the professor said.

Though Washington has kept up its pressure on the North, most recently through its extension Friday of anti-Pyongyang sanctions and its accusations over the regime's "horrible" human rights record, the U.S. has consistently signaled its desire to resume dialogue with the North.

"I think the remarks you saw out of North Korea this morning suggest that that may well be a very real possibility," Pompeo said when asked about the possibility of working-level talks with the North in the near future after the exchange of the leaders' letters.

"We're ready to go. We're literally prepared to begin at a moment's notice if the North Koreans indicate that they are prepared for those discussions," he added, according to a transcript of his remarks available at the State Department.

The nuclear talks between the U.S. and the North have been at an impasse since the Hanoi summit broke down without a deal due to gaps over the scope of Pyongyang's denuclearization and Washington's sanctions relief.

The two sides have also been at loggerheads over their approach to denuclearization.

Washington has been pushing for a comprehensive, "big-picture" approach that calls for Pyongyang's substantive denuclearization steps in return for Washington's simultaneous corresponding measures short of sanctions relief. But Pyongyang is sticking to a piecemeal, step-by-step denuclearization process that critics argue is bound to get bogged down.

Another challenge to the negotiations is the limited mandate for the North's negotiation team.

During the working-level talks in the lead-up to the Hanoi summit, the North's negotiators had no latitude in discussing its nuclear disarmament, leaving Trump and Kim haggling over the decadeslong issue during their two-day summit.

The U.S.' chief nuclear negotiator, Stephen Biegun, reportedly plans to visit South Korea this week likely to explore ways to resume working-level talks with the North. During a forum last week, Biegun said that "both sides understand the need for a flexible approach."

Moon's upcoming summit with Trump will focus on ways to strengthen cooperation in bringing the North back to the negotiating table over its denuclearization in return for sanctions relief, security guarantees and economic support.

Media speculation has arisen that during his stay in Seoul, Trump could make a highly symbolic trip to the Demilitarized Zone separating the two Koreas to highlight his contribution to the Korea peace process and make yet another conciliatory gesture to the North.

The North, however, is likely to remain cautious for the time being as it is awaiting the outcomes of Trump's summits with Chinese President Xi Jinping and South Korean President Moon.

The North's next move could depend on positive messages coming out of the summits.

But observers said the North Korean leader is not in a position just to wait and see given the worsening economic woes that could derail efforts to advance his economic agenda and deepen public grievances over shortages of food and other basic commodities.

Last year, Kim launched a diplomatic outreach toward major countries, including China and Russia, in line with the North's new strategic policy line focusing on economic development, which was seen as a course change from its years of military provocations.

The summit diplomacy, however, appears to have been a reality check for Kim. Observers said it was a sobering reminder that under the intricate web of U.S.-led international sanctions, there are limits to the North's efforts to deepen economic ties with major powers, even with its ally, China.

During a rare Pyongyang summit last week, Chinese President Xi supported the political settlement of the North Korean nuclear conundrum, saying China would play a "positive and constructive role" in the process.

Xi was expected to use his trip to the North to strengthen his hand before his talks with Trump on the sidelines of the G-20 gathering. But his summit message was seen as being largely aimed at keeping the North from veering away from the dialogue track.