Trump is scheduled to arrive here Saturday and hold summit talks with President Moon Jae-in the following day, according to its spokesperson, Ko Min-jung.

"(They plan to) have in-depth discussions on methods for close coordination between the two nations for the establishment of permanent peace through the complete denuclearization of the Korean peninsula, while further solidifying the South Korea-U.S. alliance," she said. 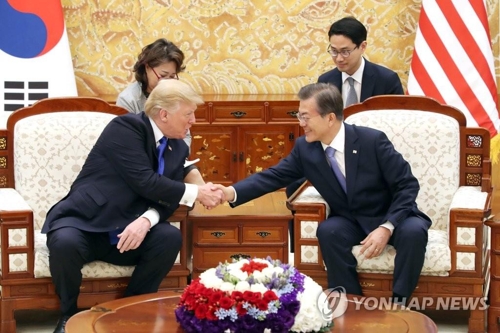 Some foreign media and experts said Trump is expected to visit the Demilitarized Zone (DMZ) during the upcoming visit here.

Regarding speculation about the possibility of Trump and the leaders of the two Koreas gathering at the truce village of Panmunjom, a Cheong Wa Dae official said there's no plan for that.

Moon formally invited Trump to visit South Korea during their April summit at the White House.