CHEORWON, South Korea, June 25 (Yonhap) -- It took nearly 70 years before the first layer of soil was removed on a front-line hill bordering North Korea to reveal traces of the unsung heroes who had fallen in bloody battles at the height of the 1950-53 Korean War.

About 300 soldiers from South Korea, the United States and France are believed to have been killed on Arrowhead Ridge, Cheorwon, some 90 kilometers northeast of Seoul, while fighting in four fierce battles against communist forces. The intense fighting also left some 3,000 enemy soldiers dead.

And they have since been underneath the hill untouched, as the ridge is located inside the Demilitarized Zone (DMZ), a no-go buffer zone between the two Koreas.

"It is the military's first excavation mission inside the DMZ since the armistice agreement," said Col. Moon Byeong-wook, who leads the task force in charge of the demining and excavation project that has been underway at the hill since April for a six-month run. 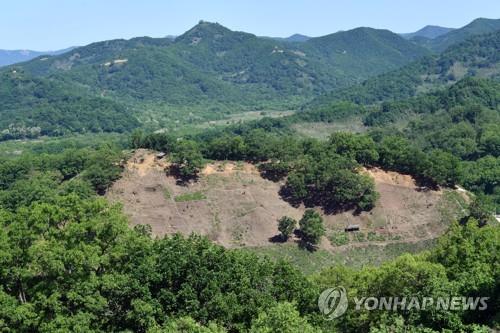 Around 100 South Korean troops and forensic experts have been working at the site for about seven hours per day. As of June 19, a total of 456 bone fragments have been unearthed on the ridge, with DNA analysis pending.

In May, search teams for the first time uncovered a complete skeleton along with the rank insignia of a staff sergeant, a military helmet, a canteen and a spoon. The bones appear to be those of a South Korean soldier.

Earlier this month, the remains presumed to be of either an American or French soldier were found, the first time that the remains of a U.N. soldier have been retrieved during the recovery work.

"Sobering to see are the many remains found in one place, which are presumed to have been haphazardly buried in those ditches. That reveals how violent and desperate the situations were at that time," Moon said.

Sifting through the dig sites, they have also found more than 32,400 items that vividly reveal the very last moments of the service personnel.

A rusty steel helmet was found pierced by six bullet holes, and a canteen had 23 such marks. A rifle believed to have been used by U.N. forces was found with a round of ammunition left in its chamber.

"During the four battles, more than 1,000 rounds of shells were known to have dropped at the ridge, making the place one of the most grisly battlefields of the Korean War," the officer noted.

Experts at home and abroad have been working to piece together skeletons for their identification, but none of the bone fragments found since April have been identified.

"Taking clues together, we could determine the sex, approximate age and injuries of the dead. For exact identification, bone pieces go through DNA ancestry testing," Lt. Col. Choi Cheong said. He works for the Agency for KIA Recovery & Identification under the defense ministry. 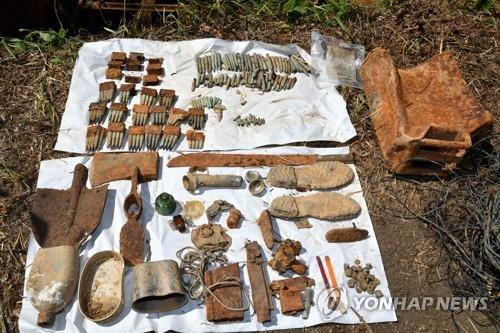 Access to the ridge inside the heavily fortified zone, just 500 meters away from the Military Demarcation Line (MDL), was possible thanks to the inter-Korean Comprehensive Military Agreement signed on September 19, 2018, which highlighted the nascent but fast-spreading peace mood on the peninsula.

During the third summit between South Korean President Moon Jae-in and North Korean leader Kim Jong-un in Pyongyang on the day, the defense chiefs of the two Koreas clinched the accord that stipulates a series of peace-building and tension-reducing measures including the halt of all hostile acts.

After designating Arrowhead Ridge for their joint six-month project to retrieve war remains starting in April, South and North Korea removed mines and explosives there together last year and built a 3-kilometer-long road that crosses the MDL to be used for transporting personnel and equipment necessary for the envisioned excavation work.

Since the end of the year, however, North Korea has remained silent about steps to follow up on the project. In March, the South's military proposed general-level talks to push for the project. But the North has given no response yet.

The South then launched the project on the promised date on its own. It is the first breach of the military pact by the North, as it was the only pledge with a specific time frame. 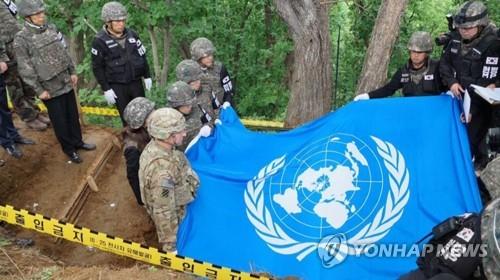 If North Korea changes its mind and participates in the joint operations, the excavation on the ridge as a whole could be completed within this year, according to officials.

It is not exactly known how many Korean and U.N. soldiers lay in the ground on the northern part of the hill.

"Despite being in a technically-at-war situation, military tensions on the Korean Peninsula have been eased, which enabled us to launch the project inside the DMZ that would help victims find a final, dignified resting place," defense ministry spokesperson Choi Hyun-soo said.

Stressing Seoul's "full preparedness for the swift implementation of the joint project," she said the successful completion of the excavation on Arrowhead Ridge could lead to recovery missions in other parts of the Demilitarized Zone, where some 10,000 additional remains of soldiers are thought to be buried.

Starting in June, civilians are also able to see the excavation site from atop an adjacent guard post (GP), as they are allowed to pass through the barbed wire fence leading to the DMZ for a newly made trekking course there. Some artifacts are also on display inside the GP for the public.

Ahead of its official opening to the public, dozens of family members of American soldiers who went missing during the Korean War visited the GP to see firsthand the place that bears traces of their loved ones.

"Without closure, it lingers in the way you cannot get a handle on it. The ideal closure would be finding his remains and burying them," James Gross said while viewing the recovery scene. He lost his only brother, Sgt. Lawrence Leo Gross, during the Korean War. 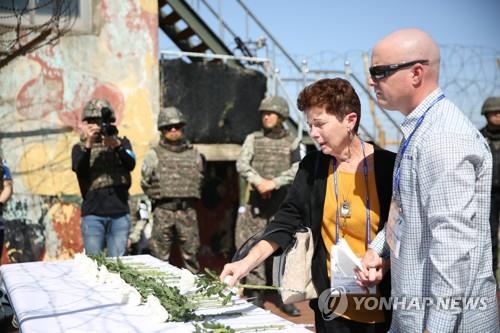