SEOUL, June 25 (Yonhap) -- Prosecutor General Moon Moo-il on Tuesday apologized for the prosecution's "shoddy" investigations into a number of politically sensitive cases in the past and its violation of human rights.

Moon, who is set to retire next month, offered the apology in a news conference in response to a recommendation from the Special Committee on Past Wrongdoings by the Prosecution, set up under the Ministry of Justice. 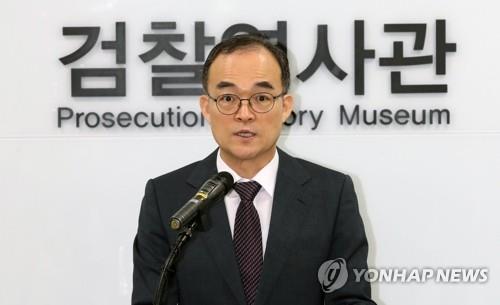 The special committee, launched in December 2017, has conducted reinvestigations into 17 past cases, including massive human rights abuses at Busan's Brothers Welfare Center in 1986, torture of democracy activist Kim Geun-tae in 1985, suspicion of illegal surveillance of civilians by Cheong Wa Dae and the Prime Minister's Office in 2010, a sex scandal involving former Vice Justice Minister Kim Hak-ui in 2013, a spy scandal of former Seoul metropolitan government official Yoo Woo-sung in 2012, a scandal surrounding actress Jang Ja-yeon's suicide in 2009, former KBS President Jeong Yeon-joo's breach of trust case in 2008 and the Yongsan Tragedy in 2009.

The committee has tentatively wrapped up its activities with a recommendation that the prosecution offer a sincere apology for its human rights violations in the process of investigating politically and socially sensitive cases.

Moon told the news conference that he humbly accepts the recommendation from the justice ministry's special committee, saying, "The prosecution repents for its failure to protect the people's basic rights and fairly exercise its investigative rights in the past."

He also said he will accept the committee's accusation against the prosecution for its failure to maintain political neutrality in the past.

The special committee accused the prosecution of shoddy investigations and human rights violations in eight cases, including the Yongsan Tragedy, and called for thorough measures to prevent the recurrence of similar wrongdoings.