The K League 1 club said the wing back has signed on for two years. Financial terms weren't disclosed.

Ulsan said Davidson, 27, can contribute on both ends as left back with his ability to jump in on offense and sharp crosses. 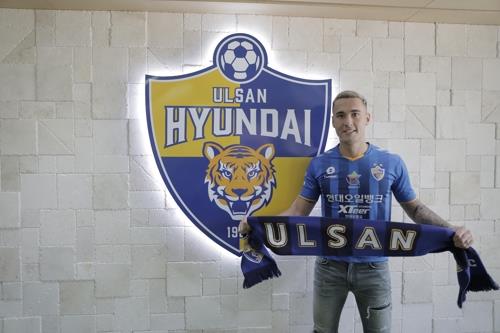 Ulsan already boast an offensive-minded wing back on the right side in Kim Tae-hwan.

The well-traveled Davidson has spent his club career in Australia, Portugal, the Netherlands, Croatia, Slovenia and England.

Davidson won a league title in Slovenia with Olimpija Ljubljana in 2017-2018 and in Australia with Perth Glory in 2018-2019. Ulsan are in contention for the K League 1 title this year, as they sit just one point behind leaders Jeonbuk Hyundai Motors with one match in hand.

Davidson represented the Socceroos at the 2014 FIFA World Cup in Brazil and played in all three group matches, and he helped the team take the Asian Football Confederation (AFC) Asian Cup title over South Korea in 2015 as the starting left full back. He has 22 caps.