SEOUL, June 26 (Yonhap) -- Yonhap News Agency will host an annual forum in Seoul this week to explore viable paths to a lasting peace on the peninsula amid renewed hopes for the resumption of stalled nuclear negotiations with North Korea.

Under the main theme of "New Korean Peninsula Regime for Shared Prosperity," the forum will take place at Lotte Hotel on Thursday, featuring top Seoul officials such as Unification Minister Kim Yeon-chul and Moon Chung-in, a special security adviser to President Moon Jae-in.

The symposium, co-hosted with the unification ministry, comes just two days before U.S. President Donald Trump's high-profile trip to Seoul for a summit with Moon, which is likely to add to ongoing efforts to bring the nuclear talks with Pyongyang back on track.

Its opening ceremony will begin with a keynote speech by the unification minister. Moon, presidential security advisor, will then deliver a special lecture on the current status of the Korea peace process and ways to move it forward. 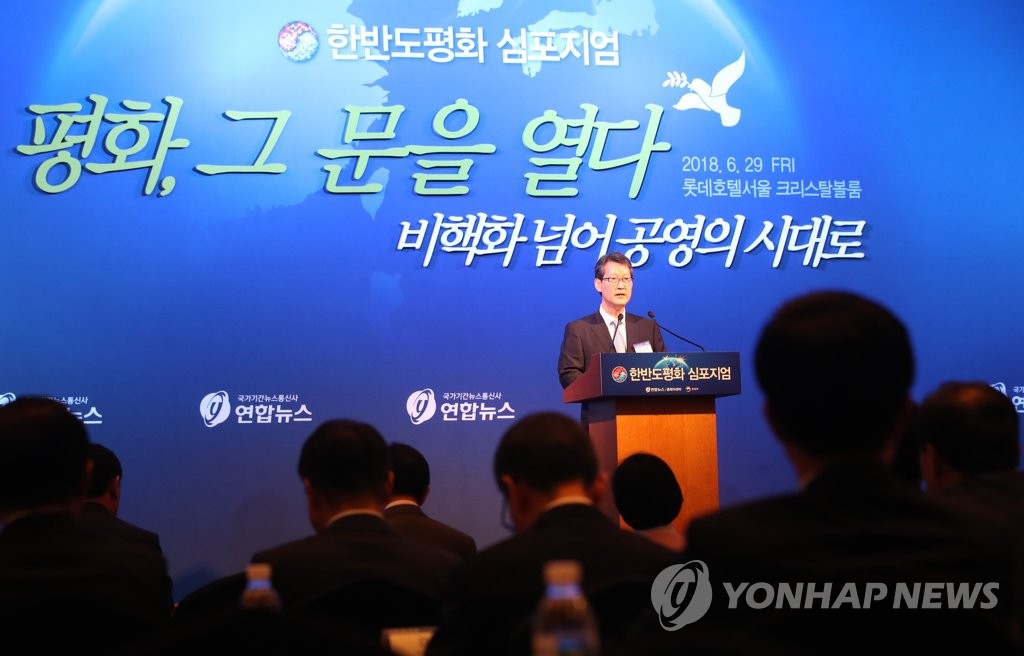 The first session is entitled "Korean Denuclearization and Peace, and Pyongyang: Seen by Foreign Press." It will mark the first time that senior editors covering the peninsula from influential global news agencies have huddled in Seoul for such in-depth discussions on the issue.

The key topic of the second session is the ongoing pursuit of a new peninsula regime where permanent peace prevails. Participants will discuss a key question: Is It possible to realize a new community of peace and economic cooperation?

Professor Kim Yong-hyun of Dongguk University and Min Kyung-ae from the Future Consensus Institute will also join the second session.

This year's peace forum comes as Seoul and Washington are looking to crank up their diplomacy with Pyongyang to resume nuclear talks that have been at an impasse since the no-deal summit between Trump and North Korean leader Kim Jong-un in Hanoi in February.

In particular, this week is expected to see a flurry of diplomatic efforts for peace on the peninsula as world leaders discuss the North Korean nuclear quandary on the sidelines of the Group of 20 summit in Osaka, Japan on Friday and Saturday.

An application for participation in the symposium is available online free of charge at https://www.onekorea2019.co.kr.