SEOUL, June 26 (Yonhap) -- Another group of South Koreans victimized by wartime forced labor in Japan during its colonial rule of the Korean Peninsula has won a compensation ruling from a local court.

The Seoul High Court on Wednesday upheld a lower court's ruling ordering a Japanese steelmaker to pay compensation of 100 million won (US$86,400) each to seven South Koreans for their wartime forced labor and unpaid work. The appellate court ordered Nippon Steel Corp. to pay the compensation to a South Korean man surnamed Kwak and six others for forcing them to engage in hard labor in Japan in the early 1940s. 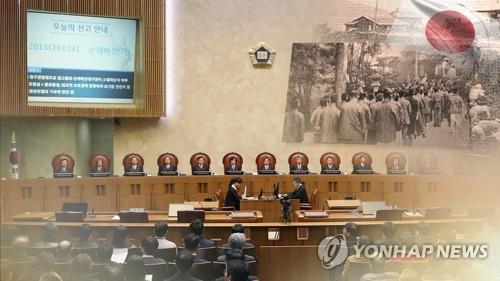 The seven victims started their compensation suit against what was then named Nippon Steel & Sumitomo Metal Corp. (NSSM) in 2013, and a Seoul district court ruled in their favor in 2015.

As all of the plaintiffs have died over the past six years, however, only their bereaved families attended the sentencing hearing at the Seoul High Court. The latest ruling was also in accordance with a similar ruling last October by the Supreme Court that ordered NSSM to pay 100 million won in compensation to each of four Korean victims of wartime forced labor.

NSSM was created in 2012 from the merger between Nippon Steel and Sumitomo Metal Industries, but it changed its name back to Nippon Steel earlier this year.

Lawyers and families of Kwak and six other plaintiffs said the victims were forcibly mobilized to work for the original Nippon Steel from 1942 to 1945.

The latest ruling is expected to further escalate bilateral diplomatic conflict between Seoul and Tokyo. South Korea's top court has ruled that the 1965 bilateral treaty signed between South Korea and Japan to settle colonial-era issues does not terminate individuals' rights to claim damages for wartime forced labor and sexual enslavement, whereas the Japanese government and firms accused of harsh labor have claimed Japan's provision of US$500 million to Korea as part of the treaty was in exchange for a complete and final settlement.

As Nippon Steel and other Japanese companies have not complied with compensation rulings from South Korean courts, victims and their lawyers are now seeking to seize assets of the Japanese defendants.

Against such a backdrop, Lim Jae-sung, a lawyer for the seven plaintiffs, urged Nippon Steel to give a "responsible" answer to the Seoul High Court's ruling.

The lawyer also said he will consider taking the next steps, such as seizure of Nippon Steel assets, after consulting with the plaintiffs' families.