SEOUL, June 26 (Yonhap) -- President Moon Jae-in said Wednesday that North Korea and the United States are in "behind-the-scenes talks" on another bilateral summit, with the peace process on the Korean Peninsula making steady progress.

"Both sides have been engaged in dialogue in regard to a third summit," he said in a joint written interview with Yonhap News Agency and six other global news agencies: AFP, AP, Kyodo, Reuters, TASS and Xinhua (in alphabetical order of company names).

He added, "It's noteworthy that the behind-the-scenes talks have been preceded by the mutual understanding of each other's position gained through the Hanoi summit."

He was referring to the second meeting between U.S. President Donald Trump and the North's leader Kim Jong-un in late February, which ended without any accord.

Moon stressed that conditions are ripe for the resumption of formal denuclearization talks.

"There has already been considerable headway made in the peace process on the Korean Peninsula, and it is still making steady progress," he said. "The resumption of negotiations between North Korea and the United States will take it to the next level. I believe everything has now fallen into place for that to happen." 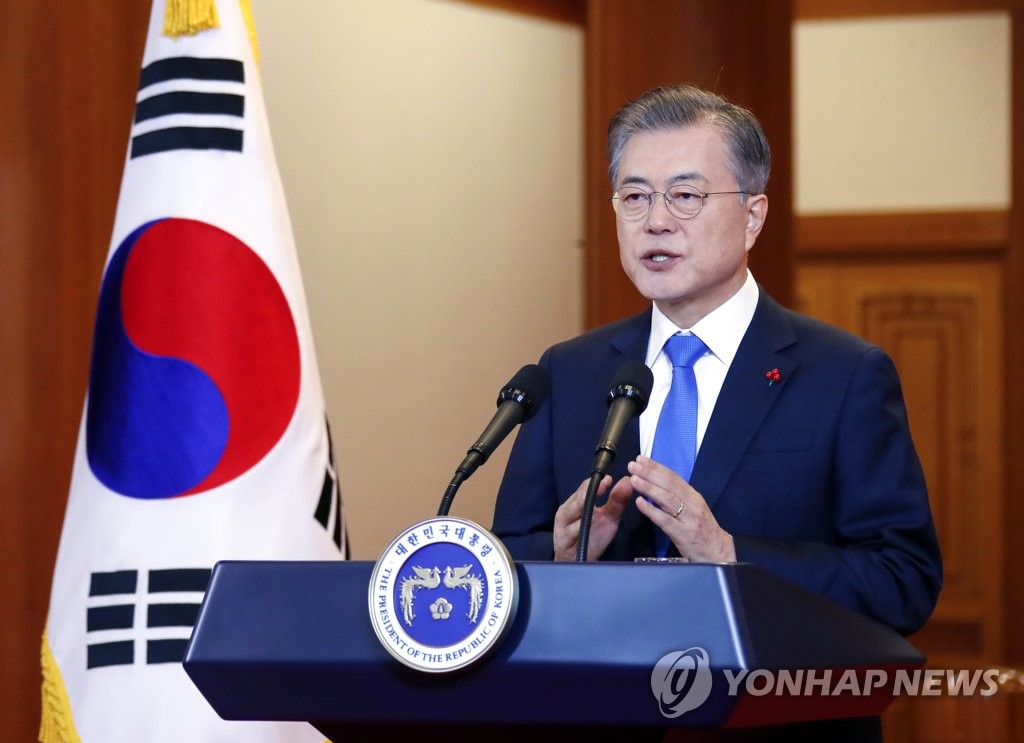 It's quite unusual that the president has talked openly about ongoing, unannounced diplomatic activity between the U.S. and North Korea.

Some observers viewed it as thinly veiled pressure on both sides to restart talks immediately.

Speaking at the White House, Trump said he will have talks with Kim "at some point."

When a reporter asked him if the summit issue was included in his recent exchange of personal letters with Kim, Trump replied, "Maybe there was, but we, you know, at some point, we'll do that. Getting along very well. He's not doing nuclear testing."

Together with the confirmation of North Korea's determination to achieve denuclearization, Moon agreed it's important to "create an environment where the North can focus on taking relevant steps."

He's gearing up for a round of brisk bilateral and multilateral summit diplomacy later this week. He's participating in the two-day Group of 20 summit in Osaka, Japan. He will then hold a weekend summit with Trump in Seoul.

He hoped for a fourth summit with Kim ahead of his Osaka visit to begin on Thursday. Kim instead met bilaterally with Chinese President Xi Jinping in Pyongyang last week.

Moon and Xi are scheduled to have a separate meeting on the sidelines of the Osaka session.

South Korea delivered its position to China that it would be "desirable" for Xi to visit North Korea first before his summit with Moon, according to the president.

"It is to create new momentum amid a lull after the North Korea-United States summit in Hanoi," he said. "I hope that President Xi's visit to North Korea last week will be a turning point that can help resume dialogues between the two Koreas and between North Korea and the United States."

Moon reiterated that he's ready to meet with Kim again irrespective of time, venue and formalities.

Moon, who had "several talks" with Kim, described him as "quite a flexible yet resolute person."

He would not question Kim's "unequivocal resolve" to "move from the past to the future by opting for economic development instead of a nuclear arsenal."

"Besides, he has never linked denuclearization with the ROK-U.S. alliance or a pullout of the United States Forces Korea," Moon said. ROK stands for the Republic of Korea, South Korea's official name. 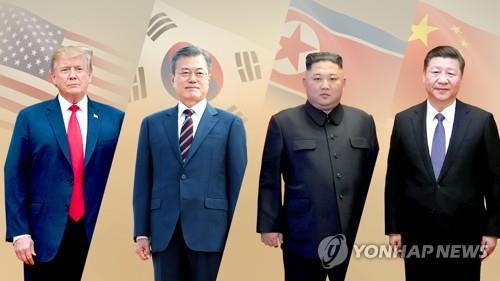 Moon emphasized the importance of completely dismantling the Yongbyon nuclear complex in the overall denuclearization process.

"If all of the nuclear facilities in the complex, including the plutonium reprocessing facilities and the uranium enrichment facilities, are completely demolished and verified, it would be possible to say that the denuclearization of North Korea has entered an irreversible stage," he said.

It's the first time that the president has publicly presented specific criteria for the secretive nation's "irreversible" denuclearization steps.

In Hanoi, Trump called on the North to do more than dismantling the Yongbyon facilities for sanctions relief, which Kim refused to accept.

Moon dismissed the view that his government may be linking the closure of the Yongbyon complex with the resumption of the Kaesong facilities and Mount Kumgang tours, two key joint ventures that are now suspended.

"I've never contended that the resumption of inter-Korean economic cooperation projects had to be exchanged for the dismantlement of the North's Yongbyon nuclear complex," he said.

With regard to efforts to ease border tensions, Moon said the two Koreas will exchange military information and observe each other's exercises if a set of existing accords, signed in Pyongyang last September, are fully implemented.

The two sides have "completely" halted hostile acts along their border, pulled out guard posts from the Demilitarized Zone (DMZ), agreed to work together for war remains excavation and endeavored for the joint use of the Han River estuary.

The liberal president described the measures as "rudimentary."

"If inter-Korean agreement in the military domain is properly implemented, it will allow us to proceed to the stage of further enhancing transparency concerning military postures by exchanging pertinent information through the inter-Korean joint military committee and observing military drills and training," Moon said.

A potential additional step, depending on progress in denuclearization, is to start work to disarm "threatening weapons such as the long-range North Korean artillery targeting our capital Seoul and the short-range missiles that both Koreas possess," he added.

He also stressed the need for reactivating inter-Korean economic projects, such as the Kaesong industrial park, after international sanctions on Pyongyang are lifted.

"For the proper development and elevation of inter-Korean relations, various economic cooperation projects have to ensue," he pointed out. "To this end, international economic sanctions must be lifted, and there has to be substantive progress in North Korea's denuclearization before sanctions can be removed."

Inter-Korean economic cooperation is an attractive incentive for the communist North to stick to denuclearization talks and it will also help reduce the financial burden of the international community in the peace process, Moon said.

"This is why I proposed to President Trump that he actively utilize inter-Korean economic cooperation as one of the corresponding measures to North Korea's substantive denuclearization steps," he added. 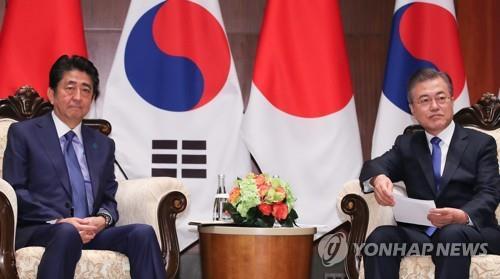 On relations with Japan, Moon asked it to pool wisdom together to resolve long-standing disputes over shared history.

"First, Korea-Japan ties are very important, and they should continue to advance in a more forward-looking way," he said. "Second, the governments of our two countries have to pool our wisdom to prevent historical issues from damaging forward-looking cooperative relations."

He characterized his government's latest offer on wartime forced labor as a "viable option."

Seoul has proposed creating a joint fund by firms of the two nations to compensate the Korean victims of the forced labor during World War II.

Tokyo rejected the suggestion, reiterating its assertion that all reparation-related matters were settled in a 1965 bilateral treaty on economic cooperation and diplomatic ties between the neighboring countries.

"Even though (South) Korea and Japan signed treaties, the wounds from the past are surfacing anew as international norms develop and awareness of human rights is enhanced," Moon emphasized. "And, above all, it should be accepted that the victims are still suffering from the pain. At the end of the day, our two countries' wisdom has to be focused on how to actually heal the victims' pain."

While a senior Cheong Wa Dae aide to Moon announced that he has no plan to meet bilaterally with Japanese Prime Minister Shinzo Abe this week, Moon did not rule out the possibility.

"For my part, the door is always open for dialogue between our two leaders in order to advance Korea-Japan relations ... Whether we can take advantage of the opportunity presented by the G-20 summit depends on Japan," he said.