SEOUL, June 28 (Yonhap) -- The United States is ready to hold talks with North Korea to move their denuclearization negotiations forward in a "simultaneous and parallel" manner, Washington's top nuclear envoy was quoted as saying Friday.

U.S. Special Representative for North Korea Stephen Biegun made the remarks when he met with his South Korean counterpart, Lee Do-hoon, a day before U.S. President Donald Trump visits Seoul for summit talks with President Moon Jae-in, according to the foreign ministry.

Biegun "reaffirmed that (the U.S.) is ready to hold constructive talks with the North to move the commitments of the June 12 Singapore Joint Declaration between President Trump and Chairman Kim Jong-un forward in a simultaneous and parallel manner," the ministry said in a statement.

Biegun, who arrived in Seoul on Thursday, also said that Sunday's meeting between Moon and Trump will serve as an important opportunity for peace and prosperity on the Korean Peninsula, according to the ministry.

Lee noted that there have been positive signals for a possible restart of dialogue since the exchange of personal letters between Trump and North Korean leader Kim, and Chinese President Xi Jinping's recent visit to Pyongyang.

Friday's meeting was the latest talks between the top nuclear envoys of the two allies to discuss joint efforts to resume the stalemated nuclear negotiations with Pyongyang and move the Korean peace process forward.

Later in the day, Biegun paid a visit to Unification Minister Kim Yeon-chul for discussions expected to include inter-Korean ties and Seoul's recent provision of humanitarian support to the impoverished neighbor via international aid agencies.

"We have excellent cooperation between our two governments, and I'm looking forward to continuing our work today," Biegun said. 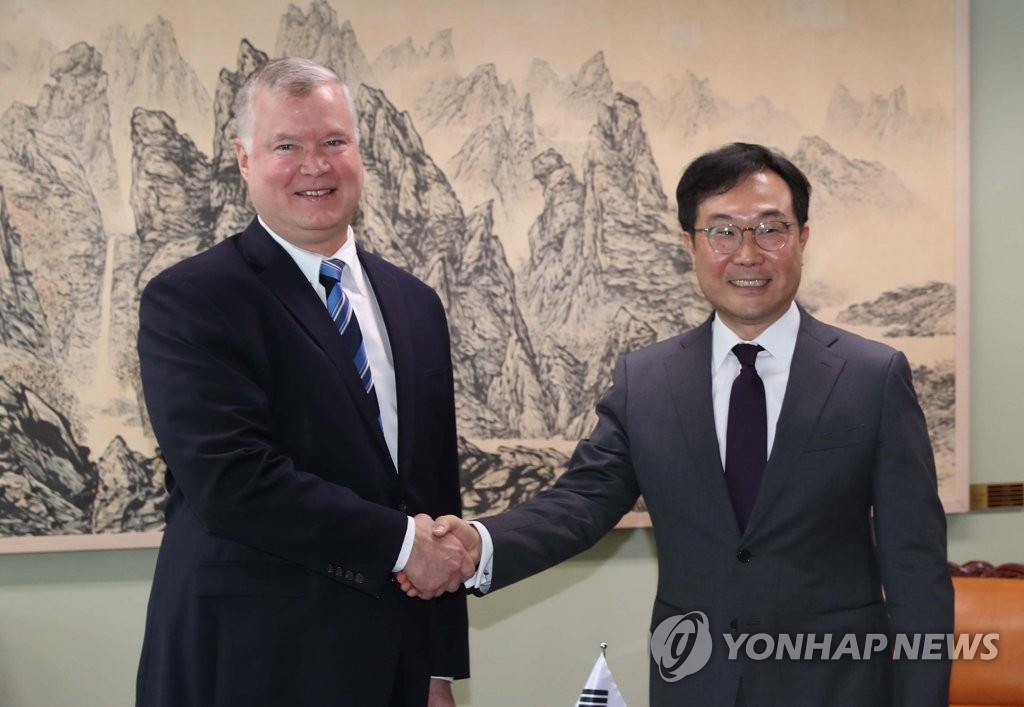 The first Trump-Kim summit in Singapore last June yielded an agreement to work toward complete denuclearization of the Korean Peninsula in exchange for U.S. security guarantees.

Negotiations between Washington and Pyongyang have been at an impasse since the no-deal summit between Trump and North Korean leader Kim Jong-un in Hanoi in February.

In recent weeks, Trump and Kim exchanged personal letters, which bolstered expectations that the United States and the North could resume their working-level talks to bridge differences and pave the way for a possible third summit.

Moon said this week that the U.S. and North Korea are engaged in back-channel talks over a third summit.

Trump will begin his two-day trip to Seoul on Saturday after his attendance at the Group of 20 summit in Osaka, Japan. He will hold a summit with South Korean President Moon Jae-in on Sunday to explore ways to address the deadlock in nuclear talks with the North.

A key sticking point between the two sides is the extent of Pyongyang's denuclearization in return for Washington's sanctions relief.

During the Hanoi summit, Kim offered to dismantle the mainstay Yongbyon nuclear complex, but Trump wanted more than the complex, which the U.S. sees as only a part of the North's sprawling nuclear program.

During an event at the Atlantic Council think tank earlier this month, Biegun emphasized that the "door is wide open" to negotiations with the North and without preconditions.

He also noted that both sides understand the need for a "flexible approach" -- remarks that some observers said insinuated the U.S.' willingness to ease its hard-line stance.

Speculation has persisted that Biegun might travel to the inter-Korean border truce village of Panmunjom to meet North Korean officials. But on Thursday, an official at Seoul's foreign ministry hinted that he might not have sufficient time to visit Panmunjom. 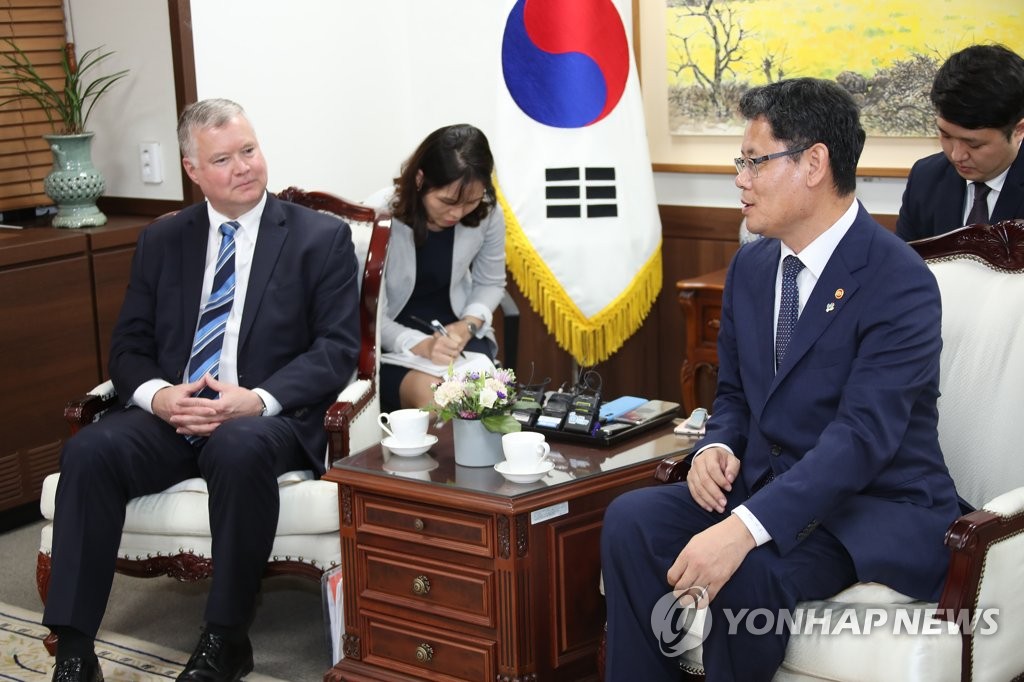