Putin was briefing Moon on the outcome of his April summit with Kim held in the Far Eastern Russian city of Vladivostok, according to deputy Cheong Wa Dae spokesman Han Jung-woo.

"President Putin quoted Chairman Kim Jong-un as saying that a security guarantee for North Korea is the key and measures to reciprocate denuclearization are necessary," Han told reporters.

Putin made the remark in the 45-minute meeting with Moon at an Osaka hotel, joined by their aides. The leaders also had a separate discussion on their own, which lasted eight minutes.

In response, Moon expressed hope for cooperation with Russia and China to maintain the "positive momentum" from the exchanges of personal letters between Kim and U.S. President Donald Trump.

He also raised expectations that U.N. sanctions will be lifted in tandem with progress in denuclearization so that the two Koreas and Russia can push for trilateral partnerships in earnest.

Moon and Putin had the talks in Osaka, Japan, as they were on a visit to attend the Group of 20 summit.

At the outset of the talks, Putin cited rapidly increasing trade and economic ties between their countries, which mark the 30th anniversary of the establishment of diplomatic relations in 2020.

"In today's talks, (we) will be able to discuss not just such bilateral matters but also other issues of mutual concern like the Northeast Asia security conditions," he said via a translator, when pool reporters were allowed to cover the first several minutes.

Moon agreed that exchanges between the two sides are on the steady rise in various sectors.

He pointed out two-way trade volume jumped 31 percent in 2018 from the previous year and the number of visitors to each other hit the all-time high of nearly 700,000.

"It is our fifth meeting and the more often we meet the better our relations are," he said.

The Moon-Putin meeting was scheduled to begin at 10:45 p.m. Friday but it opened at 12:36 a.m. Saturday. It was due to a delay in Putin's one-on-one talks with French President Emmanuel Macron at the same hotel.

Putin did not apologize for being late at the summit with Moon before media were urged to leave the room. 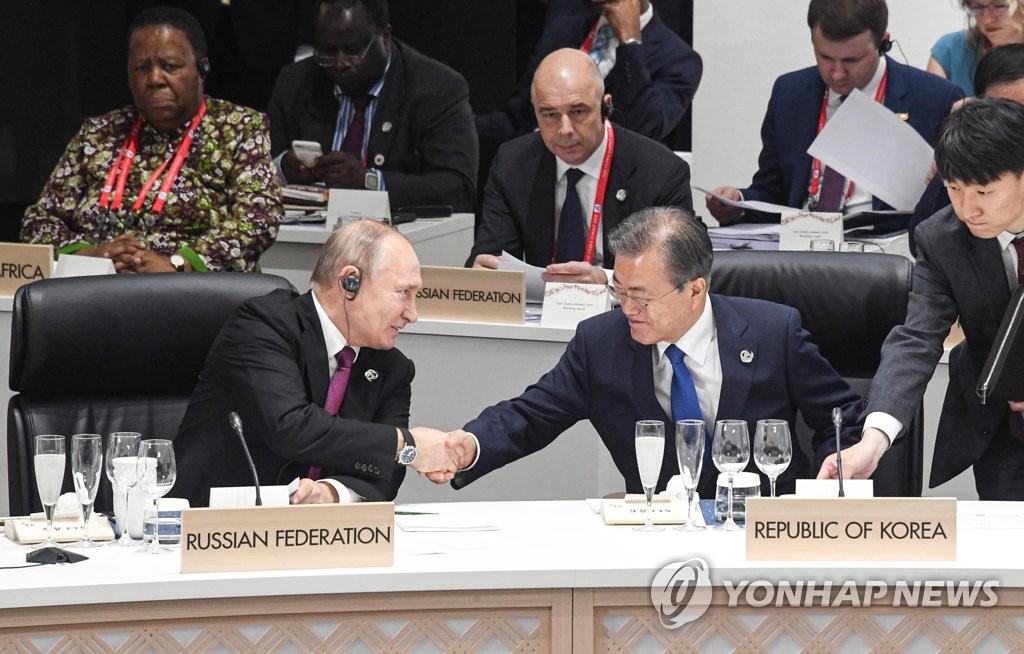 According to Cheong Wa Dae's press release, issued later, Moon and Putin agreed that the Korea peace process has entered a crucial stage and that it's necessary for Pyongyang and Washington to restart formal dialogue to make further progress.

They agreed that it's "a very important time for unswerving progress" in the peace process and "substantive progress" is needed through the early resumption of talks between the United States and North Korea, it read.

Last week, the two nations launched FTA negotiations in the service and investment sectors as they seek to broaden partnerships on science, information and communications technology, innovation, health care and medical services.