SEOUL, June 29 (Yonhap) -- U.S. President Donald Trump's surprise overture to meet with North Korean leader Kim Jong-un at the Demilitarized Zone (DMZ) is raising a set of puzzling questions over its feasibility and diplomatic utility amid an impasse in their nuclear talks.

Trump made the proposal on Twitter on Saturday morning, hours before he was to fly to South Korea from Japan where he attended the Group of 20 summit. In an unusually quick response, the North portrayed it as a "very interesting" suggestion, though it said there had not been an official proposal yet.

The development underscored Trump's desire to continue dialogue with the North Korean leader and create much-needed impetus for the nuclear parley that has been stalled since the no-deal summit between him and Kim in Hanoi in February. 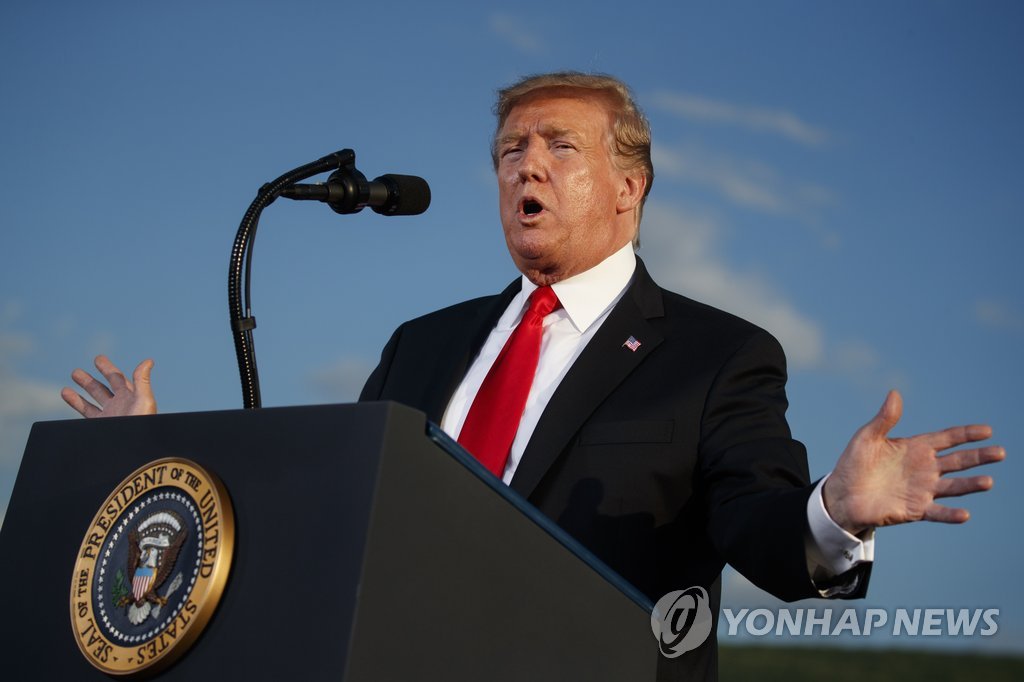 In his tweet, Trump said, "If Chairman Kim of North Korea sees this, I would meet him at the Border/DMZ just to shake his hand and say Hello(?)!"

Later, he told reporters in Japan that he "put out a feeler" to Kim.

"We seem to get along really well. ... Frankly, if I didn't become president, you'd be having a war right now with North Korea," Trump said. "I will be in South Korea. I let him know, and we'll see. We'll see each other for two minutes. That's all we can. But that will be fine."

Trump will stay in the South until Sunday. He is set to hold a summit with South Korean President Moon Jae-in on Sunday to discuss ways to move Korean Peninsula peace efforts forward.

Whether a DMZ summit on such short notice materializes remains an open question.

Some observers argued that Trump's proposal seems to be a nonstarter due to a lack of time for summit preparations, particularly considering the continuing tensions with the North over sanctions and denuclearization.

"As the North and the U.S. are caught in a tug of war over the resumption of nuclear talks and if you consider the North's recent criticism of President Moon's intermediary role, it seems unlikely that Chairman Kim would come over to the DMZ just because of Trump's proposal," said Yang Moo-jin, a professor at the University of North Korean Studies.

However, given Trump's sometimes unorthodox brand of foreign policy, his DMZ proposal could lead to mould-breaking summitry that would defy the conventional wisdom that presidential talks should follow pre-summit negotiations over the agenda, venue, date, security and not least the usual tug of war over the wording of a joint summit statement.

For the American president facing a reelection battle, a summit with Kim on the DMZ, long a symbol of division and military tensions, could help play to the domestic audience in the U.S., observers said.

"Should the summit occur, Trump may try to use it to show to the American audience that he is playing a pivotal role in managing the security situation of the peninsula, and to show off his ability to bring Kim all the way to the DMZ with a single tweet," said Park Won-gon, a professor of international politics at Handong Global University.

"On the reelection campaign trail, Trump would likely brag about his ability to call Kim out anytime, shake hands with him and reiterate that he has been managing the North Korean quandary, and that the North Korean threat to the continental U.S. has dissipated," he added.

The DMZ, particularly the Joint Security Area (JSA), is a perfect site for Trump to highlight that his support for the Korean peace process has been making tangible progress.

Under last year's inter-Korean military accord aimed at reducing border tensions, preventing accidental clashes and building mutual trust, troops on the both sides of the Military Demarcation Line in the JSA have been disarmed and weapons pulled out.

But Trump may well be aware that a hastily arranged summit that would yield no tangible results could prompt political criticism. He could also face public opprobrium for engagement with an authoritarian ruler with what the U.S. itself has called a "horrible" human rights record.

"President Trump has a keen sense for the theatrical," said Leif-Eric Easley, a professor at Ewha University in Seoul.

"Such symbolic moves are necessary to overcome decades of distrust on the Korean Peninsula. But symbolism is not sufficient for peace. Reconciliation requires a sustainable political foundation; in the case of North Korea, that means denuclearization and improving human rights," he added.

The DMZ summit proposal might have made the North Korean leader carefully calibrate both merits and demerits.

After his summit with Chinese President Xi Jinping in Pyongyang earlier this month, Kim could use the DMZ summit with Trump to play to the domestic audience with the narrative that the leaders of the two major powers are seeking to court him through summitry -- a diplomatic achievement that eluded his predecessors.

But another summit with no outcome for a country thirsty for economic support and sanctions relief could put Kim in an awkward position, analysts said.

Above all, key to arranging another round of summit diplomacy between the U.S. and the North will be how to narrow differences in their denuclearization talks.

A major bone of contention is the extent of Pyongyang's denuclearization in return for Washington's sanctions relief.

During the Hanoi summit, Kim offered to dismantle the mainstay Yongbyon nuclear complex, but Trump wanted more as the U.S. sees the complex as only a part of the North's sprawling nuclear program.