Their landmark handshake at the Demilitarized Zone (DMZ) capped months of skepticism surged over their top-down approach to the North's denuclearization in the wake of the no-deal summit between Trump and Kim in Hanoi in February.

Unfruitful horse-trading among their subordinates and recent inflammatory actions, including the North's short-range missile launches, and the U.S.' seizure of a North Korean ship and extension of anti-Pyongyang sanctions, had darkened the prospects of the summit-driven approach.

But the highly symbolic encounter has created fresh impetus for the approach that might not be a tried and true remedy for the nuclear quandary but has been bringing the Korean War foes into uncharted territory for their diplomacy.

"This is a historic moment ... the fact that we are meeting," Trump told Kim at the start of their talk after stepping into the North across the Military Demarcation Line and then back into the South.

"I think the relationship that we've developed has been so much to so many people. And it is just an honor to be with you," he added. 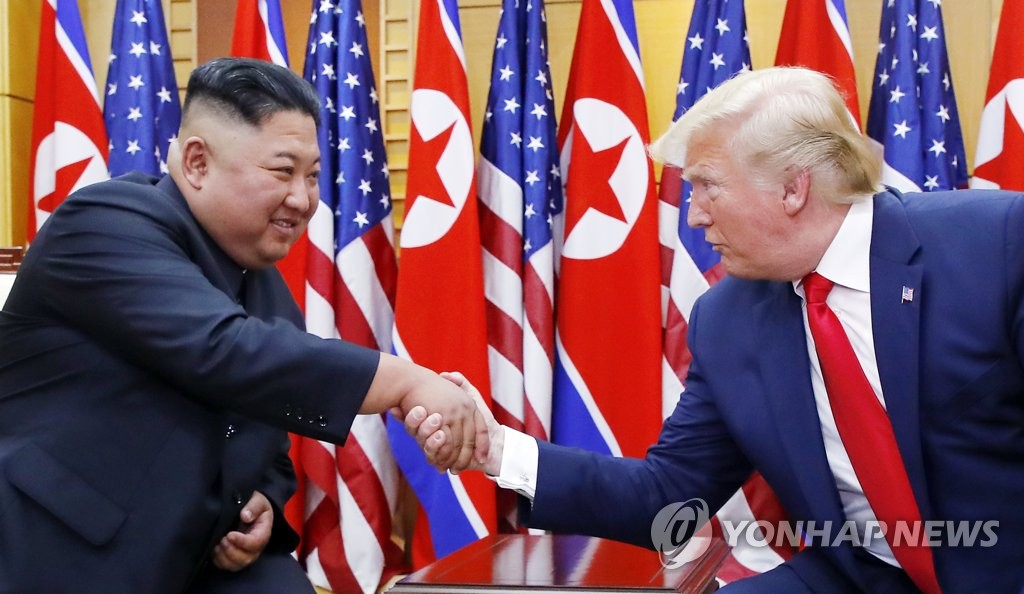 Noting that Trump became the first U.S. president to visit the North, Kim said, "This is an expression of his willingness to eliminate all unfortunate past and open a new future."

The top-down approach was initiated by a combination of South Korean President Moon Jae-in's search for a denuclearization path different from the past and Trump's unique personal diplomacy with the North.

Since his inauguration in May 2017, Moon has invested much of his political capital into the peace and reconciliation efforts with the North, which resulted in three summits with Kim in April, May and September last year.

The cross-border summits paved the way for two historic summits between Trump and Kim in Singapore last June and in Hanoi in February.

The Singapore summit yielded a four-point agreement, including the leaders' vaguely worded commitment to work toward the "complete denuclearization" of the peninsula. But the Hanoi summit broke down without a deal, calling the top-down approach into question.

Doubts about the relatively novel approach are based on the thinking that such a high-stakes, complex and technical issue as the North's denuclearization must not be left for the leaders to address in a hourslong showdown.

"If they can pull this off, the chairman (Kim) and the president, God bless them," former U.S. nuclear negotiator Robert Gallucci told Yonhap in an interview last month.

"But I am skeptical and I would feel that it would have a higher prospect of succeeding in the engagement if it was first prepared at the working level before the top people met," he added.

Past working-level nuclear talks between the U.S. and the North or within the six-party framework, involving them, the South, China, Japan and Russia, ran aground in the end, though their agreements raised fleeting hopes of reconciliation and peace on the peninsula.

Critics have said that working-level talks with North Korean negotiators were likely to be protracted and get bogged down while Pyongyang could stall for time to keep advancing its nuclear and missile programs.

Thus, the Moon administration has promoted the top-down approach based on lessons from the past, while at the same time trying to overcome the pitfalls of that approach.

"We believe this top-down approach is the most suitable in the current situation, where leaders have strong political determination," Seoul's top nuclear envoy, Lee Do-hoon, said during a peace forum on the southern resort island of Jeju last month.

"Yet, as we have seen in Hanoi, there are limits to this approach as well. That is why the top-down approach has been and will continue to be supplemented by efforts at the working-level," he added.

Hard-line stances among U.S. security hawks, such as Trump's National Security Advisor John Bolton, have fueled worries that they could dampen the American president's enthusiasm in engagement with the North Korean leader.

The tough-liners in Washington have insisted that there would be no sanctions relief until Pyongyang takes sweeping, verifiable denuclearization steps, while the regime has called for the U.S. to show flexibility, with Kim having set a year-end negotiation deadline.

Their demand has drawn furious reactions from the North, heightening tensions. But the tensions have eased with the continued display by Trump and Kim of confidence in each other underscoring their desire to keep dialogue alive.

Whatever Trump's hawkish aides have said, one clear fact is that Trump, after all, calls all the shots, experts noted.

"While President trump has far less ideological baggage I would say. He wants to make a deal. Make no mistake. President Trump is in charge," he added.

Then, a key question in the nuclear parley boils down to how much concessions both Trump and Kim can make in a way that would not undermine their political fortunes and their countries' national interests.

The two sides have been at loggerheads over the extent of Pyongyang's denuclearization in return for Washington's sanctions relief and security guarantees.

During their Hanoi summit, Kim offered to dismantle the mainstay Yongbyon nuclear complex in return for partial sanctions relief. But Trump wanted more than the complex, which he believes is only part of the North's sprawling nuclear program.

Trump's continued "no rush" remarks raised speculation that he could try to manage the status quo rather than aggressively engaging in negotiations with the North, the results of which could negatively affect his re-election battle.

But he could also seek a foreign policy coup amid tensions with Iran and China, observers noted.