The two leaders shook hands with grins and crossed the inter-Korean border into the North together in their historic third face-to-face encounter, making Trump the first sitting U.S. President to have set foot in the communist state. The two countries fought each other in the 1950-53 Korean War.

They briefly chatted and posed for photos together there before walking across it into the South.

Trump said he was "proud to step over that line." He said flamboyantly, "It's a great honor. ... It's a great day for the world." 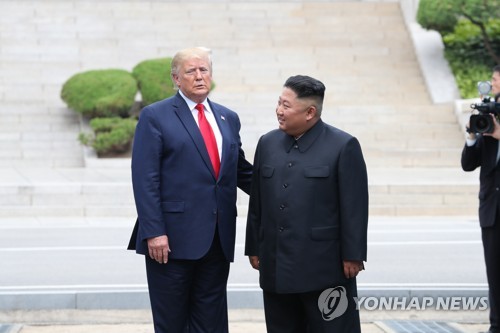 Kim hailed it as an "expression of his willingness to eliminate all the unfortunate past and open a new future."

It was their first meeting since their Hanoi summit in late February fell part due to differences over the definition of substantive denuclearization in return for sanctions relief.

After they crossed back into the South, they were joined by South Korean President Moon Jae-in. The three leaders walked into the Freedom House, a building on the southern side.

Kim and Trump sat together for joint press availability for a time, then pool reporters were urged to leave the room while the two leaders remained behind and apparently held closed-door bilateral talks.

Despite a post-Hanoi stall in denuclearization talks, the Panmunjom meeting demonstrated that their personal ties remain good, as Trump has often touted.

Kim spoke about the short notice of the meeting. He said he was "surprised" by Trump's Twitter invitation Saturday to the DMZ.

It's unclear whether Washington and Pyongyang would formally describe the Panmunjom session as a third bilateral summit. 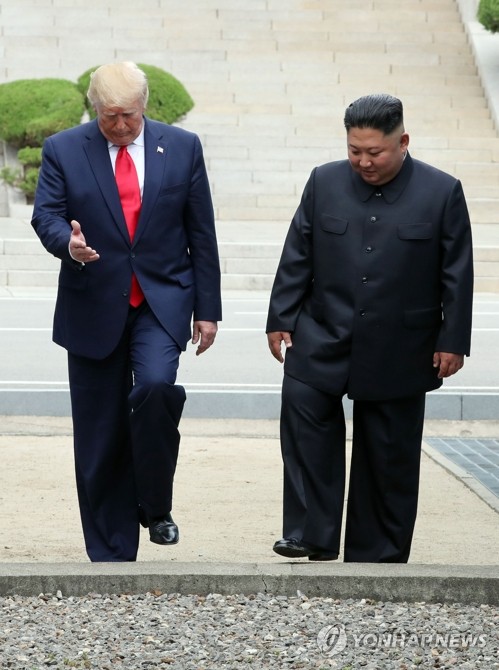