Biegun, special representative for North Korea, traveled by helicopter to the northern side of the border truce village of Panmunjom late Saturday, together with National Security Council official Allison Hooker, according to diplomatic sources familiar with the matter.

It's not known who was in the North Korean team, but it was rumored to have been led by Kim Chang-son, leader Kim's protocol chief.

They discussed the protocol and other necessary procedures for the third summit of their leaders in the heavily fortified border that has separated the two Koreas since the 1950-53 Korean War ended in an armistice.

Their meeting came only hours after North Korea's Vice Foreign Minister Choe Son-hui responded positively to what appeared to be Trump's spur-of-the-moment tweet offer to meet Kim at the Demilitarized Zone separating the two Koreas. 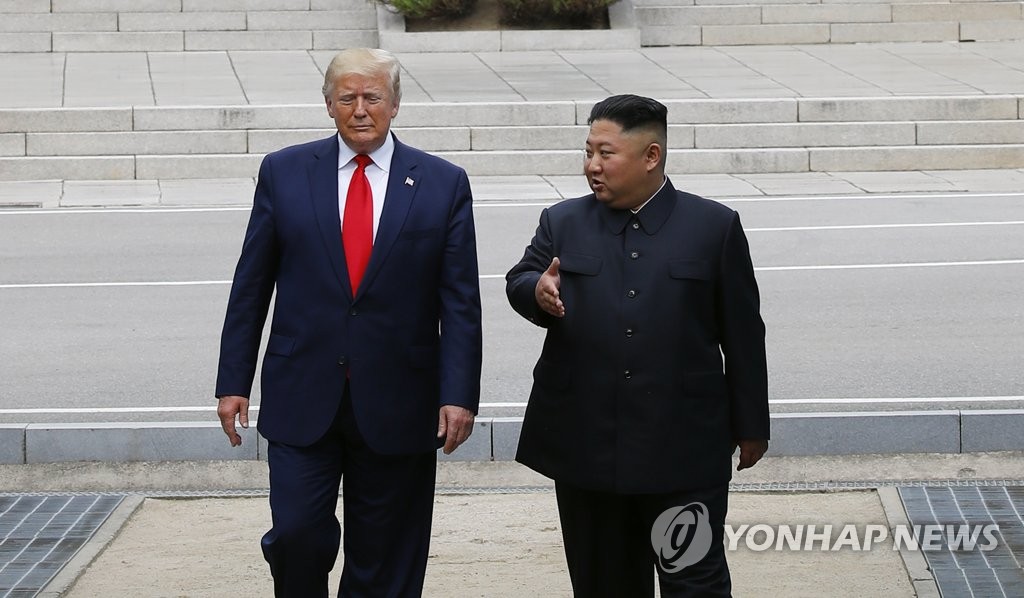 While attending the Group of 20 summit in Osaka, Japan, early Saturday, Trump wrote that if Kim were to read his message, they should meet at the border village for "a handshake" and perhaps "say Hello" while he was in Seoul for a summit with President Moon Jae-in.

Trump appears to have made the bold decision alone. Even Biegun, who had arrived in Seoul earlier in the week ahead of the Moon-Trump summit, was surprised to read Trump's tweet and found himself having less than a day left to prepare for summit talks, the sources said.

Trump's message was more dramatic because he had earlier ruled out the possibility of meeting Kim at the heavily fortified border when he was asked about the likelihood of such an encounter before he left for Japan.

With the North's positive signal, the U.S. side contacted Pyongyang through a hotline between the United Nations Command (UNC) and North Korea and agreed to hold a working-level meeting to arrange the summit, according to the sources.

Speculation over a DMZ meeting of the two leaders had gained further traction after Biegun and Hooker did not show up at the dinner meeting scheduled for the night, which was part of the schedule for the Moon-Trump talks.