SEOUL, July 1 (Yonhap) -- The United States and North Korea are poised to face off in working-level nuclear talks as early as this month on the back of their leaders' renewed political will, though a breakthrough seems far from guaranteed.

After his unprecedented meeting with North Korean leader Kim Jong-un at the Demilitarized Zone (DMZ) on Sunday, U.S. President Donald Trump said that the two sides will resume the talks "within a few weeks" to see "whether or not they can do something."

Secretary of State Mike Pompeo said that the talks are expected to occur in mid-July. Special Representative for North Korea Stephen Biegun will lead the U.S. negotiation team while the North Korean team will consist of foreign ministry officials, he said.

The talks, if held, will be the first official negotiations since the second summit between Trump and Kim in Hanoi in February collapsed without an agreement due to gaps over the scope of Pyongyang's denuclearization and Washington's sanctions relief.

Sunday's historic border meeting tamped down rising skepticism over the nuclear negotiations and offered a much-needed boost to the Korea peace process.

But the political drama full of symbolism masked the yawning gap between the two sides over the North's full denuclearization, how to proceed with its disarmament and what incentives should be offered in return. 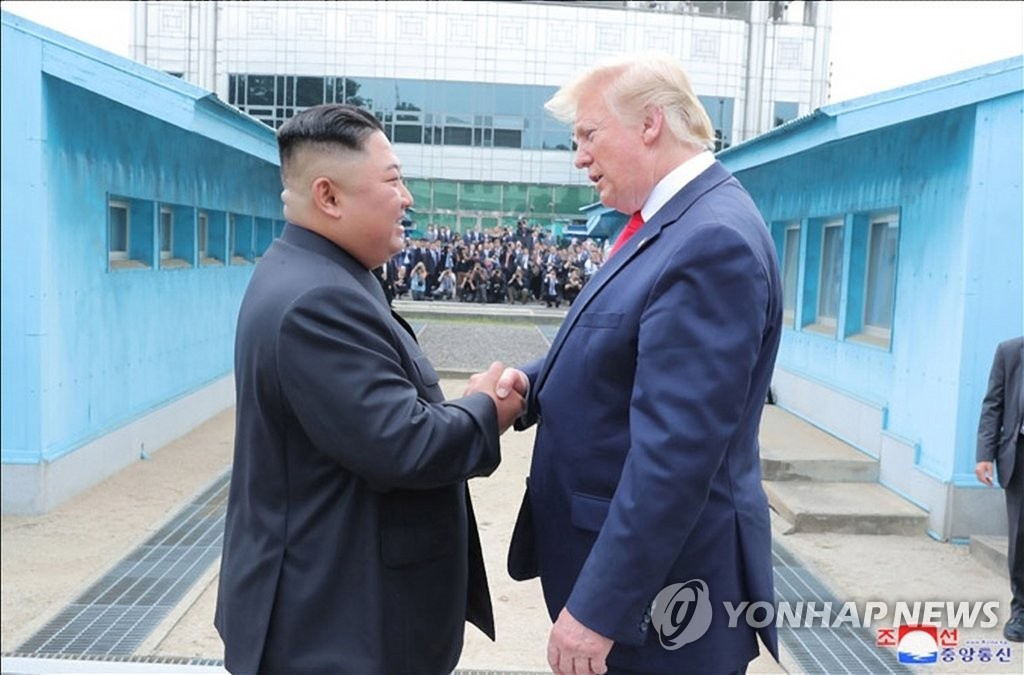 Ahead of key political events in Pyongyang later this year, such as the 71st anniversary of its founding on Sept. 9, Kim could seek progress in the upcoming nuclear talks so as to achieve diplomatic feats to flaunt in front of the domestic audience.

Worsening economic hardships, caused by biting global sanctions and natural disasters, could motivate Kim to seek an early settlement of a deal with Washington, as they could deepen public grievances and erode his legitimacy to govern.

But there have been no clear signs yet of either side giving ground.

After his talks with Kim at the DMZ, Trump told reporters, "Speed is not the object, we want to see if we can do a really comprehensive, good deal."

Though it recently noted the need for a "flexible" approach, Washington has been pursuing a comprehensive deal with the North that calls for Pyongyang's substantive denuclearization steps in return for Washington's simultaneous corresponding measures -- likely short of sanctions relief.

But Pyongyang appears to be hewing to a piecemeal, step-by-step denuclearization process that critics say is its long-standing strategy to string out the negotiations and wring out more concessions.

"There are still clear differences between the U.S. and the North, if you consider Trump's mention of a comprehensive deal," said Park Won-gon, a professor of international politics at Handong Global University.

"In a nutshell, the U.S. wants the North's declaration of its nuclear stockpiles, a crucial step to map out a denuclearization roadmap. The key here is whether the North would agree to that demand for the declaration," he added.

Efforts to reach consensus on the shared end-state of the North's nuclear disarmament also remain elusive.

During the Hanoi summit, Kim offered to dismantle the North's mainstay Yongbyon complex in return for partial sanctions relief. The complex north of Pyongyang is a nuclear juggernaut home to 390 buildings, including both plutonium- and uranium-based nuclear facilities.

Trump spurned that offer as he apparently thought that the complex does not represent the entirety of the North's sprawling nuclear program and that it can't be traded for the lifting of sanctions, a core element of his high-pressure campaign against the North.

Uncertainty also arises over the makeup of the North's negotiation team.

The composition of the American team appears to be unchanged. Biegun will lead the working-level talks with the North while Pompeo will continue to spearhead the overall nuclear negotiation process.

On the North Korean side, the foreign ministry is expected to lead the negotiation. But it remains unknown who Biegun's counterpart will be or whether the North will install a new person in charge of talks with the U.S.

Pyongyang's First Vice Foreign Minister Choe Son-hui appears likely to helm the overall working-level negotiation. But given her recently exalted stature, she may not come to the fore at the risk of becoming another scapegoat should the negotiations flounder again, observers said.

But Kim Yong-chol, former head of the United Front Department, has recently appeared among top North Korean officials, apparently to show that he remains in the top political echelons. Kim Hyok-chol, once Biegun's counterpart, has been out of the public eye amid rumors that he has been purged.

What is evident, however, is that the North's foreign ministry appears likely to take the lead in the forthcoming negotiations while the United Front Department, an organ in charge of inter-Korean relations, may stay away from the talks.

Some observers said this could mean that the North may lessen its engagement with the South with regards to the nuclear negotiations, as its foreign ministry does not handle inter-Korean ties.

Substantive progress at the working-level talks could pave the way for another formal summit between Trump and Kim. Yet progress is far from certain, given that the North's negotiation team usually does not have a clear mandate to engage in serious horse-trading on the denuclearization agenda.