The companies blamed lower demand in major markets, such as China, for their lackluster sales results last month, while expressing concerns that the ongoing trade war between the United States and China will continue to weigh on their sales unless there is a breakthrough. 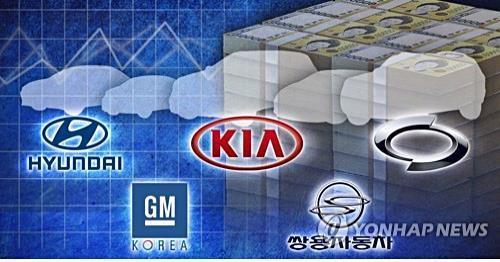 Hyundai and Kia, the country's two biggest carmakers, didn't report any significant rebound in sales last month due to low demand in China and emerging markets, like Turkey.

The maker of the Sonata sedan and the Santa Fe sport-utility vehicle expects the Palisade SUV, which is now on sale in the U.S. market, to help boost sales in the second half.

The two appear to badly need to bolster sales in China, the world's biggest automobile market, to achieve their sales target of 7.55 million vehicles for this year. From January to May, their sales in China plunged 22 percent to 343,383 autos from 438,364 during the year-ago period, the data said.

In contrast, they have posted improved sales in the U.S. and Europe, helped by competitive SUVs and localized models.

Three other carmakers all posted declines in June sales due to weak demand for their models.