SEOUL, July 2 (Yonhap) -- President Moon Jae-in said Tuesday that North Korea and the United States have effectively declared an end to their hostile relations with the symbolic weekend meeting between their leaders at the inter-Korean border.

Although they did not sign any document, their action was tantamount to a "de facto declaration of an end to hostile relations and the beginning of a full-fledged peace era," Moon stressed, speaking at a Cabinet meeting.

He was referring to a meeting between U.S. President Donald Trump and North Korean leader Kim Jong-un at the truce village of Panmunjom in the Demilitarized Zone (DMZ) on Sunday.

Trump even stepped over into North Korea, together with Kim, becoming the first sitting American president to set foot in the communist nation. The U.S. and North Korea fought fiercely against each other during the 1950-53 Korean War, which ended in an armistice. The two Koreas remain technically at war, as a formal peace treaty has yet to be signed.

Moon had a brief three-way meeting with Kim and Trump at Panmunjom, although he stayed away from their talks, which lasted for nearly an hour. 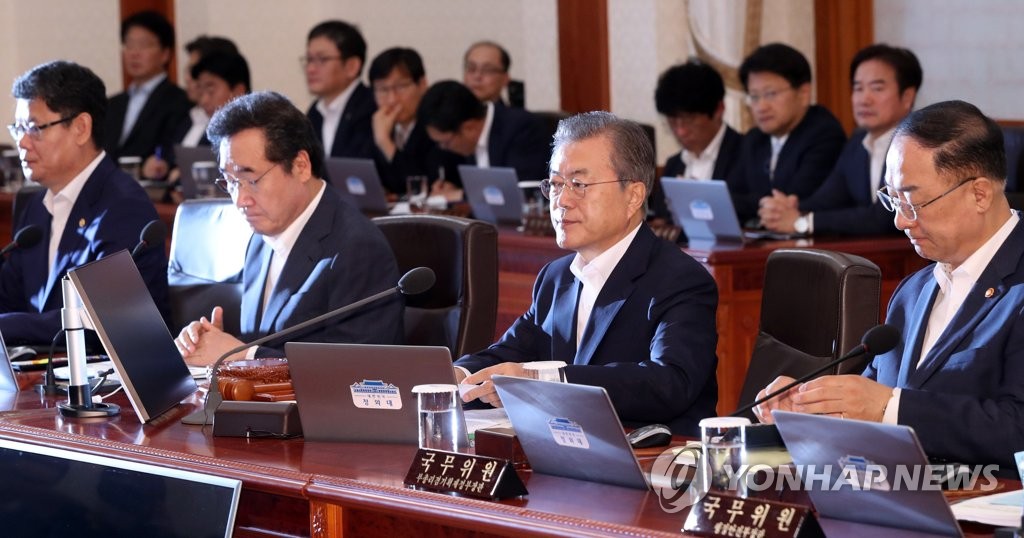 Moon also offered an account of his joint visit with Trump to a DMZ observation post named Ouellette. He noted that it was the first time the presidents of the allies had traveled to the DMZ together. It was also meaningful, Moon added, that he and Trump wore suits, not military uniforms or bulletproof vests.

Moon told Trump there that half of the South Korean population of 51 million live in Seoul and nearby Gyeonggi Province, as little as 40 kilometers away from the inter-Korean border.

Pointing to where the Kaesong industrial complex, a joint venture between the two Koreas, is located, Moon explained the positive effects on the economies of the two Koreas that would happen if operations there were to be resumed.

He said all of those things were possible thanks to not only the personal trust between the leaders but also a sharp reduction in border tensions, including the disarming of the Joint Security Area in Panmunjom under a military accord between the two Koreas.

"I would like to emphasize once again, as I have often done, that the improvement of inter-Korean relations and the progress of North Korea-U.S. dialogue are intertwined in a virtuous cycle," he added.

Moon described what happened at the DMZ on Sunday as a result of "amazing imagination," which was unthinkable in the existing "diplomatic grammar."

Trump first formally suggested the DMZ meeting with Kim via his Twitter account on Saturday and Kim accepted it.

"The extraordinary proposal and bold response are a product of amazing imagination that go beyond common sense," he said.

Such imagination is also necessary in domestic administration and politics to resolve pending problems, as well as in culture, the arts, science and technology, Moon said.