SEOUL, July 3 (Yonhap) -- South Korea on Wednesday slashed its economic growth outlook this year to between 2.4 percent and 2.5 percent due to weak exports and sluggish investment.

South Korea blamed slowing exports and sluggish investment, as well as trade friction between the United States and China, for its downward revision.

South Korea's exports fell 13.5 percent on-year to US$44.18 billion in June, extending their on-year decline for the seventh consecutive month due mainly to the prolonged trade row between the world's top two economies.

Exports to China -- South Korea's largest trading partner -- slipped 24.1 percent in June from a year earlier, while outbound shipments to the U.S. edged down 2.5 percent due to sluggish demand for chips and mobile devices.

Adding to the economy's woes, a recovery in the semiconductor sector is being delayed, according to the Ministry of Economy and Finance.

The price of semiconductors -- which account for one-fifth of South Korea's exports -- has plummeted sharply since late 2018, squeezing the profit margins of Samsung Electronics Co., the world's largest memory chip maker, and its smaller rival SK hynix Inc.

South Korea accounted for more than 60 percent of the global memory market in 2018.

Hong Nam-ki, the minister of economy and finance, said South Korea's exports in 2019 could fall by 5 percent from 2018, when outbound shipments hit an all-time high of $605.5 billion.

Officials said South Korea's growth outlook could be lowered unless parliament approves a 6.7 trillion-won ($5.6 billion) extra budget in July for a quick implementation.

In April, the government proposed the extra budget to cope with an economic slowdown and fine dust air pollution.

But it remains unclear when the National Assembly might vote on the bill due to a political standoff.

Hong said Japan's export restrictions are not something that could make South Korea revise its growth outlook.

Japan announced earlier this week that it will tighten regulations on exports to South Korea of high-tech materials, including fluorine polyimide, that are essential for the production of semiconductors and display panels.

Tokyo's move is widely seen as a thinly veiled retaliation against Seoul over compensation of South Korean victims of forced labor during Japan's 1910-45 colonization of the Korean Peninsula.

Last year, the South Korean Supreme Court ordered Japanese firms to compensate South Korean victims of forced labor, but Japan maintains that all reparation issues stemming from its colonial rule were settled under a 1965 government-to-government accord that normalized bilateral relations.

On Wednesday, the Ministry of Economy and Finance unveiled a set of measures to boost exports and investment.

The ministry said the government would speed up administrative procedures and work out the differences of relevant parties to ensure three large projects worth about 8 trillion won ($6.8 billion) can quickly break ground.

One of the projects involves the construction of a 4.6 trillion-won theme park that includes a hotel and a golf course in Hwaseong, about 60 kilometers south of Seoul. The theme park project had floundered for more than a decade.

Hong said the government will work out difficulties that hinder investment.

"Investment must be revived to cope with growing downside risks," Hong said in a joint news conference with other ministers at a building in western Seoul. 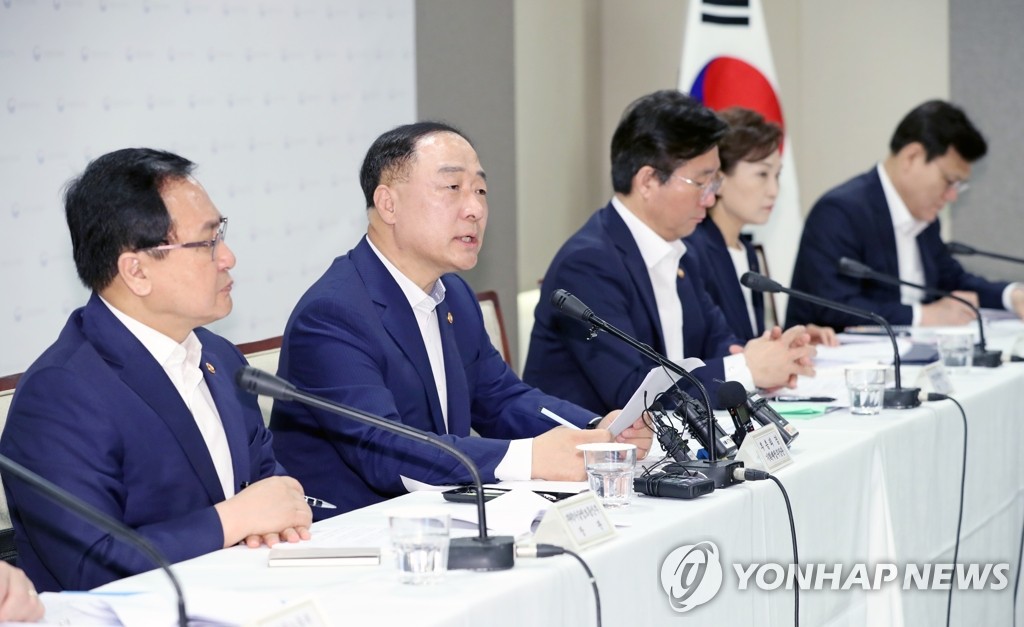 The ministry also said the combined investment by public companies will rise to more than 54 trillion won this year, up from the previous 53 trillion won.

The unemployment rate for young adults -- those aged between 15 and 29 -- stood at 9.9 percent in May, much higher than the overall jobless rate of 4 percent, according to Statistics Korea.

The government also said the state-run Korea Development Bank and other policy lenders will extend 30 trillion won to new sectors, such as future vehicles and bio-health between 2019 and 2021, up from 15 trillion won.

In a move to increase domestic consumption, the government reduced a special excise tax on purchases of passenger cars to 3.5 percent from 5 percent and extended it until December this year.

The government also extended a temporary tax cut on purchases of hydrogen fuel-cell electric cars until the end of 2022 from December this year.

Since 2017, the government has waived a 5 percent special excise tax on purchases of hydrogen fuel-cell electric cars in a move to boost sales of eco-friendly vehicles.