WASHINGTON, July 4 (Yonhap) -- North Korea appears to have picked a former ambassador to Vietnam as its new chief nuclear envoy, a diplomatic source said, indicating the regime has effectively rounded out its team for upcoming working-level talks with the United States.

During the impromptu summit between U.S. President Donald Trump and North Korean leader Kim Jong-un at the Demilitarized Zone (DMZ) on Sunday, Pyongyang notified Washington of the makeup of its team to be led by Kim Myong-gil, the source said.

Kim Myong-gil, well versed in U.S. affairs, is expected to serve as the counterpart of U.S. Special Representative for North Korea Stephen Biegun. He will replace Kim Hyok-chol, who is rumored to have been purged after the no-deal summit between Trump and Kim in Hanoi in February.

"I understand that the North and the U.S. notified each other of who will serve as the chiefs of their respective negotiation teams," the source told Yonhap News Agency on condition of anonymity. 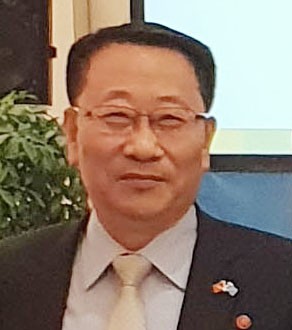 During their landmark encounter at the DMZ, Trump and Kim agreed to restart working-level negotiations. U.S. Secretary of State Mike Pompeo predicted that the talks may resume in the middle of this month.

But the North has retooled its team, apparently now to consist largely of foreign ministry officials, in contrast to the previous configuration in which the United Front Department, a key party organ in charge of inter-Korean affairs, held significant sway.

Foreign Minister Ri Yong-ho is speculated to be Pompeo's counterpart. The two are expected to meet on the sidelines of an annual regional forum slated to occur in Thailand early next month.

Given her exalted status in the North's power echelons, Pyongyang's First Vice Foreign Minister Choe Son-hui is expected to wield influence over its negotiation team.

From 2006-2009, Kim Myong-gil served as the deputy chief of the North's mission to the United Nations in New York. He is known to have deepened his knowledge of U.S. affairs while working at a peace research institute under the foreign ministry.

In August 2015, he was appointed as ambassador to Vietnam. During the Hanoi summit in February, he accompanied the North Korean leader closely, which means that the veteran diplomat saw firsthand how the talks ended in failure.

After nearly four years in the Southeast Asian nation, he returned to Pyongyang in April this year.

Progress in the upcoming nuclear talks is likely to hinge on whether the North Korean team has any mandate to engage in serious horse-trading on the denuclearization issue.

During the working-level talks in the lead-up to the Hanoi summit, the North's negotiators did not have any latitude to touch on the denuclearization issue, leaving the hard bargaining to Trump and Kim during the two-day showdown.
(END)