GWANGJU, July 4 (Yonhap) -- The organizing committee for the upcoming 2019 FINA World Aquatics Championships said Thursday it will open the Athletes' Village for the competition this week as delegations from overseas are set to arrive in South Korea.

The German delegation, which will enter South Korea through Incheon airport, west of Seoul, on Friday morning, is scheduled to attend a ceremony the same day at the village in the southwestern city of Gwangju to mark the village's opening, along with the delegations of South Korea, the United States and the Netherlands. About 100 athletes, including 68 South Koreans, are expected to enter the village to take part in the July 12-28 swimming competition.

An additional 41 South Korean athletes plan to stay at the village starting on July 16. Most delegations taking part in the competition are expected to arrive at the village by July 19, two days before swimming event will begin.

The athletes' village, whose construction was completed in March in Gwangju's western district of Gwangsan, will accommodate about 4,000 athletes and officials and approximately 2,000 media members covering the event.

The 94,131-square-meter village, which consists of 1,660 apartments in 25 buildings with 15 to 25 floors, is only 10 minutes by car from Gwangju Airport, 12 minutes from Songjeong Station and 15 minutes from the main venue of the biennial aquatics championships.

Also starting Friday, the authorities will keep the competition's venues and the village off limits to the public for security reasons.

A record 2,995 athletes from a record 193 of the 209 FINA member countries completed registration by the deadline of June 13. 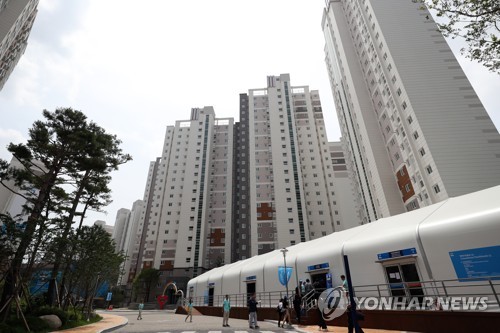