SEOUL, July 8 (Yonhap) -- A new contingent of South Korean troops will be deployed to South Sudan later this month to carry out U.N. peacekeeping operations, the Army said Monday.

A send-off ceremony is planned later Monday in Incheon, west of Seoul, for more than 280 rotational troops to serve at the "Hanbit" unit in the African country for eight months, according to the Army.

Some of them will depart for the country later in the day, while the rest will leave two weeks later.

They are the 11th batch of troops to be sent there since South Korea began deployment in 2013.

The troops will focus on helping repair the Peace Road in the war-torn country, a 200-kilometer expressway linking Bor, Mangela and Pibor that aims to revive its economy and better support U.N. missions there, it added.

South Sudan declared its independence in July 2011 from its Arab-dominated northern neighbor Sudan after decades of civil war that killed more than 2 million people. 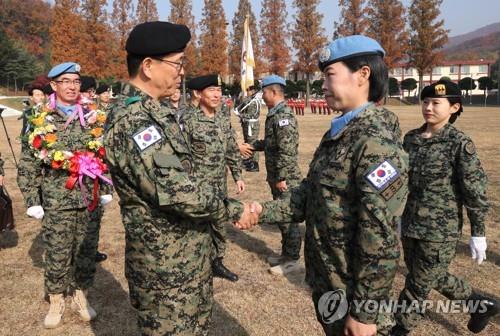