The palace is where the embalmed bodies of the founder and his son Kim Jong-il lie in state.

Accompanying the leader to the mausoleum were senior government and party officials, including Choe Ryong-hae, president of the Presidium of the Supreme People's Assembly, the country's rubber-stamp parliament, and premier Kim Jae-ryong, the Korean Central News Agency (KCNA) said. 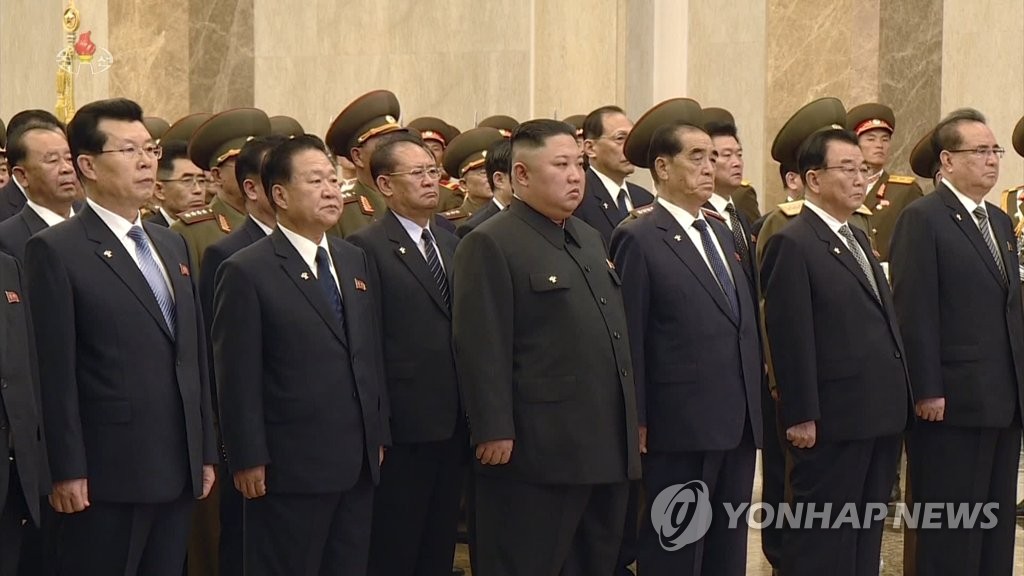 The North's state TV also aired Kim's visit to the mausoleum. TV footage showed that people in Pyongyang observed a moment of silence with the sounding of a siren across the country at noon, while the North's national flag was seen flying at half mast.

This is the first time in two years the North's media has reported on Kim's trip to the mausoleum on the occasion of the anniversary of the late founder's death.

After taking office, Kim paid tribute at the Kumsusan Palace every year until 2017, but the North's media did not report on his visit there last year.

Kim also attended a national memorial service at an indoor stadium in Pyongyang. The North last held such an event five years ago when it marked the 20th anniversary of the death of the leader's grandfather.

During the 45-minute-long recorded memorial service aired by the North's state TV later in the day, Pak Kwang-ho, director of the party's propaganda and agitation department, delivered an opening speech, which was followed by a moment of silence and an eulogy read by Choe Ryong-hae.

Kim was sitting at the center of the leadership seats. He did not make any remarks.

Observers say that North Korea appears to have organized more events than usual this year to mark the death of its founding leader given that it tends to arrange large-scale celebrations every fifth or tenth year of any anniversary. 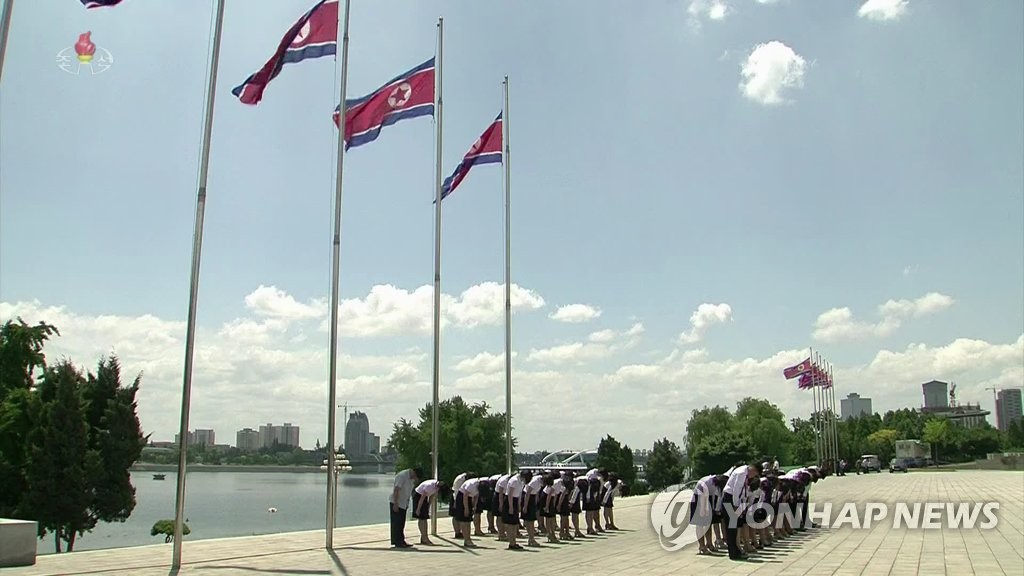 North Korean media urged its people to build a powerful economy based on the principle of "self-reliance" as it marked the event.

"Today's grand advance in economic development is (the continuation of) a sacred and rewarding struggle of our great leaders to realize their aspirations for a patriotic and powerful country," the Rodong Sinmun, the organ of the country's ruling party, said in an editorial.

"Raising high the slogan for self-reliance and self-sufficiency and achieving a miraculous myth once again, (we) should demonstrate to the world the reviving status of the DPRK of Kim Il-sung and Kim Jong-il," it added, using the abbreviation of the North's official name, the Democratic People's Republic of Korea.

The paper said there are challenges from hostile forces standing in the way of the North's advance but that the country's future remains bright as it has powerful political and military foundations and growth potential for a self-reliant economy.

The emphasis on self-reliance appears aimed at consolidating social unity and urging its people to follow the party's new strategic line that focuses more on economic development on the occasion of the anniversary.

North Korea has made a pitch for self-reliance since the breakdown of leader Kim Jong-un's second summit with U.S. President Donald Trump in February. The summit ended without a deal as they failed to find common ground over the scope of Pyongyang's denuclearization steps and Washington's sanctions relief.

Nuclear talks have since been stalled, but Kim and Trump agreed to resume working-level dialogue within a few weeks of their recent surprise meeting at the inter-Korean border.