(ATTN: UPDATES with quotes of Moody's report and background in paras 3-11)

Moody's rating for Asia's fourth largest economy has been Aa2, the third-highest level on the company's table, since 2015, when the rating agency upgraded it from Aa3.

"Korea's economy is highly diversified and competitive when compared with rating peers, although its reliance on international trade poses near-term drag from flagging external demand."

The ongoing risk of military confrontation with North Korea poses unusually pronounced exposure to event risk for a sovereign in the Aa-rated category.

In addition to geopolitical risk, South Korea's primary credit challenges relate to the long-term economic and fiscal costs brought on by a rapidly aging population.

Statistics Korea said last month that the number of South Koreans aged 65 years or older could surpass 10 million in 2025 and jump to 18.79 million, or 38.4 percent of the country's population, by 2047.

The projection represented a dramatic hike from the 7.07 million people aged 65 or older in 2017 -- 13.8 percent of the country's 51 million population.

A country is defined as an aged society when more than 14 percent of its people are 65 or older. 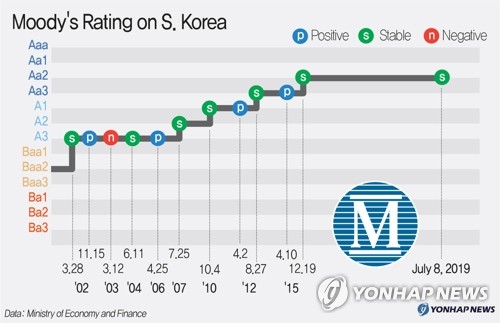 (LEAD) Moody's keeps its rating on South Korea at Aa2

(LEAD) Moody's keeps its rating on South Korea at Aa2