SEOUL, July 8 (Yonhap) -- A senior official of broadcaster SBS resigned Monday over allegations of surreptitiously taking a photo of a woman with a digital camera, the broadcaster said.

The broadcaster accepted a resignation letter submitted by Kim Sung-joon, a 55-year-old editorial writer at the broadcaster and formerly one of its top anchormen.

According to police, Kim has been booked without detention on suspicion of photographing the lower part of the woman's body at a subway station in Seoul's Yeongdeungpo Ward on Wednesday.

Kim was caught red-handed after police officers arrived at the scene on a tip-off from a witness who was nearby the woman and notified the victim of the alleged photographing, police said.

Kim denied the allegations, but a photo of the woman was found on his cellphone, they said.

Later in the day he apologized to the victim and company staff.

"I apologize for leaving a permanent scar on the victim's heart," Kim said in a statement released to reporters. "I also wish to ask for forgiveness from everyone at SBS, my former workplace, for causing the trouble."

Kim added he will sincerely cooperate with the investigation and live rest of his life in remorse.

After joining the broadcasting network in 1991, Kim served as the main anchorman of news program "SBS 8 News" from 2011 to 2014 and from late 2016 to May 2017. He has run a radio program on current affairs since he became an editorial writer at the broadcaster in August 2017. 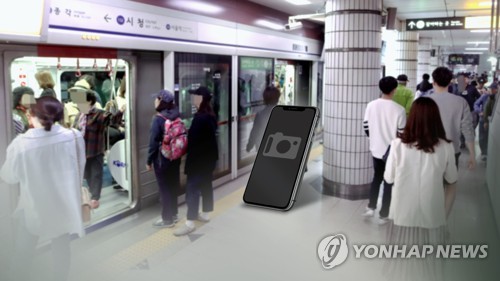