SEOUL, July 8 (Yonhap) -- President Moon Jae-in called on Japan on Monday to withdraw its recent export control against South Korean firms, describing it as an attempt to limit trade for a political purpose.

Breaking his strategic reticence on the sensitive issue, Moon said his administration will first make "calm" efforts to resolve it diplomatically.

In case of "actual damages" to South Korean companies, however, the government will be left with no other choice but to take "necessary" measures, he stressed, presiding over a meeting with senior Cheong Wa Dae officials.

He added he hopes to avoid such a vicious cycle of tit for tat.

"(I) call on the Japanese side to retract the measure and call for sincere consultations between the two countries," he said. 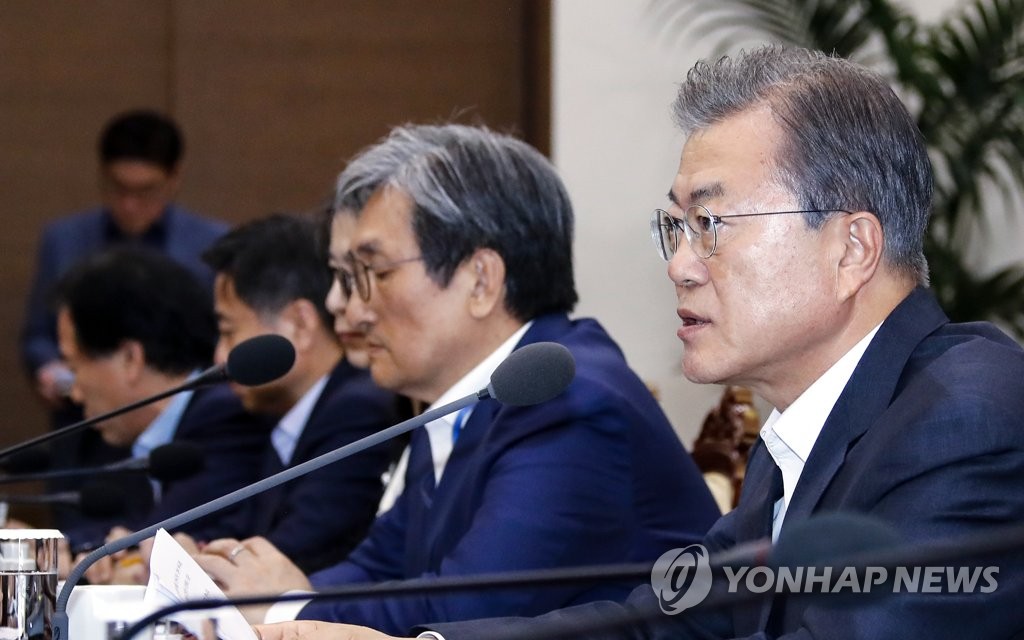 The president's comments were the first public expression of his view on Japan's termination last week of preferential treatment for the export of some key materials used in the production of semiconductors and digital displays.

Moon had refrained from openly talking about the matter over the past week. Instead, his chief of staff for policy, Kim Sang-jo, and Economy and Finance Minister Hong Nam-ki had a series of meetings with business leaders to discuss ways to cope with Japan's move. The trade and foreign ministries were in charge of working-level responses.

On the background for Moon's shift from his low-key approach, a Cheong Wa Dae official said he had two audiences in mind: South Koreans who are increasingly anxious about the situation and Japanese leaders.

His remarks were a "message for the people" but also aimed at preventing a deterioration of the trade stand-off between Seoul and Tokyo, the official said in a press briefing.

It represents Moon's "strong" desire to head off further damage to the friendly relations between the neighboring countries, the official added.

For South Korean businesses, Moon pledged every possible support so that they can boost the global competitiveness in the manufacturing sector by reducing their reliance on the imports of core materials.

"(I hope) corporations will expand technology development and investment, and make more endeavors to break from the externally dependent industrial structure via win-win cooperation with component and material (production) firms," Moon said.

Moon voiced concern about increased uncertainties over the global economy amid the spread of protectionism and trade disputes.

He said it's necessary for South Korea to respond to its economic woes in a "cool-headed and calm" manner.

He cited the strong fundamentals of Asia's fourth-largest economy.

Earlier in the day, Moon noted, the global rating agency Moody's Investors Service announced a decision to keep its rating for South Korea at "Aa2" with a stable rating outlook.

He added that overstating economic difficulties in a bid to raise an excessive sense of crisis will take a toll on the sentiment of market players and the overall economy itself.

Japan is apparently protesting against the Moon government's attitude on the issue of compensating Korean victims of Japan's wartime forced labor.

South Korea's Supreme Court ruled in favor of them last year, ordering Japanese companies to pay compensation, and the government has stated that it respects the judiciary's decision.

Tokyo maintains that all reparation issues associated with its colonial past have been settled through the 1965 bilateral treaty to normalize diplomatic ties between the neighbors.