SEOUL, July 10 (Yonhap) -- A royal reception hall of the Joseon Dynasty (1392-1910) was opened to the public on Wednesday after four years of restoration.

Practically wrapping up the restoration of Heungbokjeon, an annex at Gyeongbok Palace where King Gojong used to greet foreign delegations when he was on throne from 1863 to 1907, the Cultural Heritage Administration (CHA) opened the facility to the public on a trial basis. Gyeongbok is the main royal palace of Joseon in central Seoul.

Built in 1867, Heungbokjeon was demolished during Japanese colonial times in order to help repair parts of Changdeok Palace that were partially destroyed by fire in 1917.

The cultural authorities will officially reopen Heungbokjeon next year after completing the final decoration and painting. 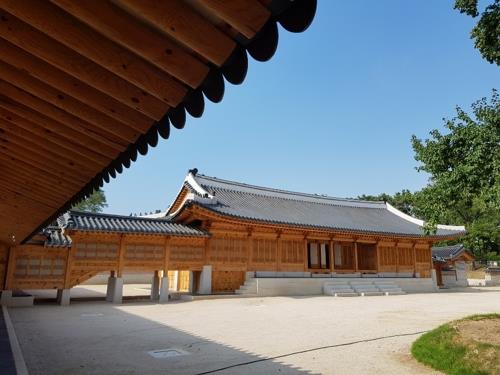