SEOUL, July 10 (Yonhap) -- South Korea and the United States on Wednesday unveiled a sculpture symbolizing their decadesold alliance as a key guarantor of peace on the peninsula, in a sprawling American military base south of Seoul, officials said. 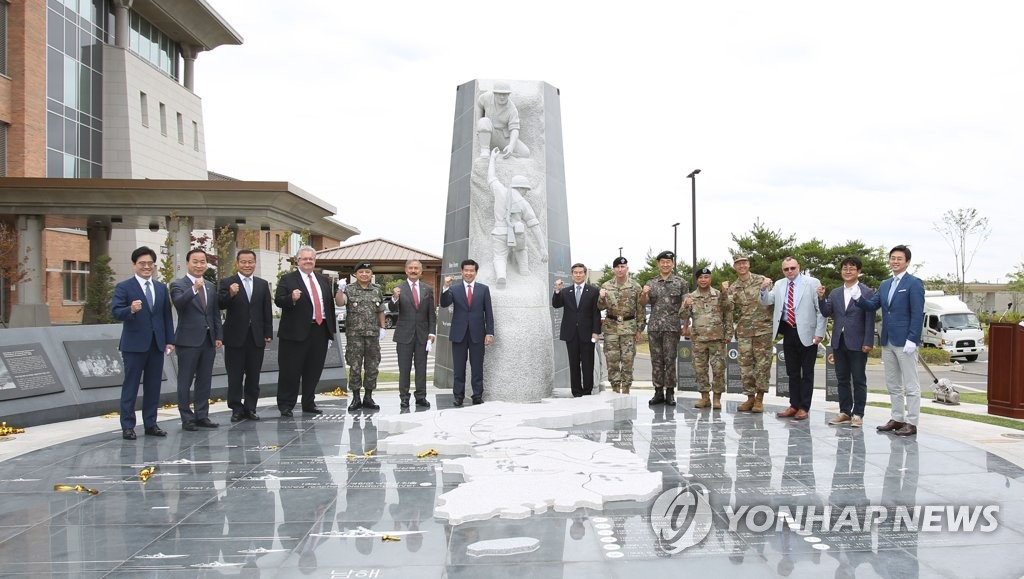 "This sculpture is an honorable record of the past and present of the South Korea-U.S. alliance, and at the same time it will serve as a stepping stone toward its new future," Jeong said in his congratulatory remarks.

"As we open a new era of peace and prosperity on the Korean Peninsula, (South Korea and the U.S.) are continuing the history and spirit of the great alliance while buttressing such changes (on the peninsula) with great power," he added.

Abrams said that the sculpture stands as a "symbol of past sacrifices and the promise of deep friendship" between the allies for generations to come.

"This memorial is a manifestation of the service, contribution, and sacrifice, the blood, sweat and tears of those who fought side by side and stood shoulder to shoulder," the USFK chief said.

"Let us never forget those who made the ultimate sacrifice. As you reflect on our past, also recognize that we have a bright future ahead," he added.

Under the theme of "Tomorrow as One, Beautiful Companion," the sculpture consists of five segments: the main tower, the Wall of History, the Clock of History, the Korean Peninsula sculpture, and the symbols of the Army, Navy, Air Force and Marine Corps. It was built with a donation from AMCHAM.

The main tower symbolizes Operation Chromite, a pivotal operation that turned the tide of the 1950-53 Korean War in favor of the U.S.-led U.N. forces, and depicts South Korean and U.S. troops overcoming challenges as one unit.

Key events from the Cold War conflict are inscribed on the right-hand side of the Wall of History, while the left side shows the timeline of the development of the security alliance since the war.

The Clock of History shows major events since 1950, including the North's invasion of the South, the signing of the armistice agreement, the creation of the South Korea-U.S. Combined Forces Command and the relocation of the USFK headquarters to Pyeongtaek.

The Korean Peninsula sculpture on the ground describes key battles during the war, highlighting the alliance's pivotal security role.

S. Korea-U.S. alliance sculpture unveiled in U.S. base in Pyeongtaek

S. Korea-U.S. alliance sculpture unveiled in U.S. base in Pyeongtaek