The Hwasong-15 ICBM that the communist country test-fired on Nov. 29, 2017, has an estimated range of 8,000 miles, or 12,874 kilometers, which is "capable of striking any part of the continental U.S.," according to the "2019 Strategic Digest," an annual publication by the USFK along with the United Nations Command and the Combined Forces Command.

Following its successful launch of the ICBM last year, North Korea has claimed that it is the first missile capable of putting the whole U.S. within its range. In its 2018 defense white paper, South Korea stopped short of describing it as having a range of over 10,000 km. 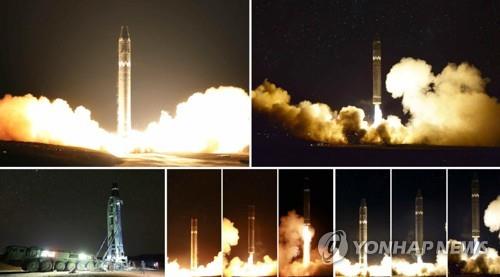 According to the magazine, Pyongyang has two other types of ICBMs: the Hwasong-13, which can fly as far as 5,500 km, and the Hwasong-14 missile with an estimated range of 12,874 km, which is capable of "reaching most of the continental U.S." The North test-fired the Hwasong-14 on July 4, 2017.

"Although 2018 saw a welcomed respite from recurrent North Korean provocations in 2016 and 2017, unchanged is the fundamental challenge the ROK-U.S. Alliance faces in terms of the threat posed by North Korea," the USFK said in the magazine. ROK is the acronym of South Korea's official name, the Republic of Korea.

Since November 2017, North Korea has abided by its self-declared moratorium on nuclear and ICBM tests as dialogue on its nuclear weapons program with the U.S. and peace efforts between the two Koreas has taken place. But it conducted major weapons tests twice in May 2019 involving short-range missiles amid stalled denuclearization talks.

"While (North Korean leader) Kim Jong-un ordered the dismantlement of a missile test site as well as the highly publicized destruction of the nuclear testing facility at Punggye-ri, much work remains to move toward the eventual goal of final, fully verified denuclearization," the USFK noted. 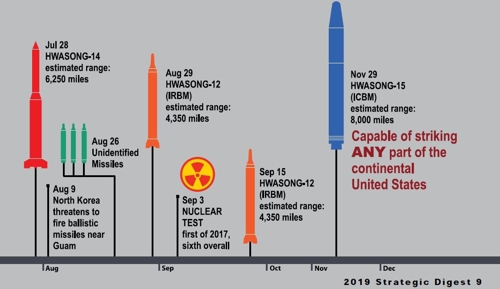