The artistic directors -- Natasha Ginwala and Defne Ayas -- were named in March by the Gwangju Biennale Foundation to curate the 13th edition of the international art show set to open in September next year.

The duo arrived in South Korea this week for their basic research for the project.

Founded in 1995, the Gwangju Biennale is a contemporary art biennale co-hosted by the foundation and the Gwangju Metropolitan City.

During a press conference in Seoul, the duo said they will try to explore the theme of "intelligence" through various perspectives including art, science, spirituality and materiality.

In that vein, their artistic exploration will feature very primitive intelligent art forms -- such as shamanism -- up to the front-line subject of artificial intelligence, also delving into different disciplines including technology, religion, philosophy and science.

With three key words -- healing, resistance and reestablishment -- running through the 2020 exhibition, the event will also commemorate the 40th anniversary of the Gwangju Democratization Movement, a massive bloody pro-democracy uprising that took place on May 18, 1980, in Gwangju. The tank-led quelling of the uprising left hundreds of people killed and thousands wounded.

How to represent the historic event during next year's Gwangju Biennale is an important issue, they said, adding that a group of people linked to the event may be invited to the art show alongside academic, publishing and other events dedicated to the issue.

The 33-year-old Ginwala has curated several international exhibitions and is currently an associate curator at Gropius Bau, Berlin.

The 43-year-old Ayas is currently working as a curator at large at V-A-C Foundation in Moscow, having curated for cultural institutions and research initiatives across the world, including the Witte de With Center for Contemporary Art in Rotterdam.

The duo will leave South Korea on Saturday before returning in September to announce a lineup of artists for the 2020 show. 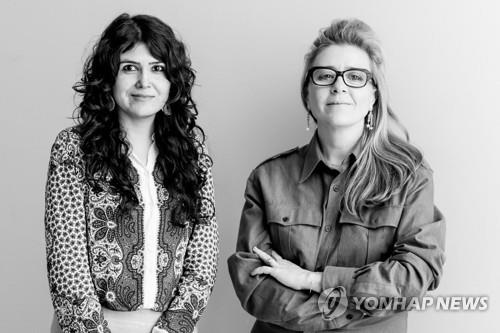