By Lee Haye-ah and Baek Nari

WASHINGTON, July 12 (Yonhap) -- A top South Korean presidential official expressed uncertainty Friday over the possibility that the United States and North Korea will resume denuclearization negotiations this month as planned.

Kim Hyun-chong, deputy chief of Cheong Wa Dae's National Security Office, told reporters that the U.S. appears to be waiting for a response from the North.

"I think we have to wait and see," he said after coming out of a meeting with his U.S. counterpart, Deputy National Security Adviser Charles Kupperman, at the White House. "I think they're waiting to hear back from the North."

U.S.-North Korea negotiations were expected to resume within days in line with an agreement between U.S. President Donald Trump and North Korean leader Kim Jong-un at their inter-Korean border meeting on June 30.

No date or venue for the talks has been announced.

"Kupperman and I talked about ways to move the negotiations forward and agreed to keep an open communication line and hold frequent phone calls and discussions," the South Korean official said.

Lee Do-hoon, Seoul's chief nuclear envoy, met with his U.S. counterpart, Stephen Biegun, in Germany this week to coordinate their approach to the upcoming negotiations with the North.

Talks broke down after Trump and Kim's second summit in Vietnam in February ended without a deal due to differences over the scope of North Korea's denuclearization and sanctions relief from the U.S. 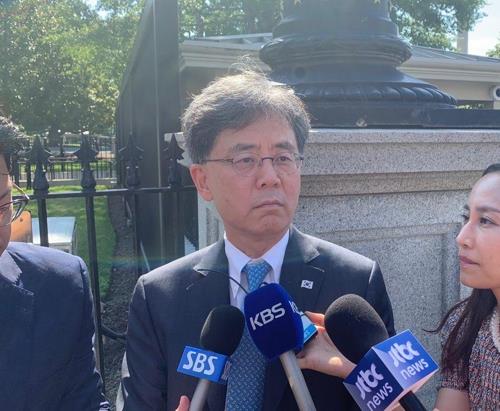