In a letter sent to Japan's Ministry of Economy, Trade and Industry, the Federation of Korean Industries (FKI) said Japan's extended trade curbs would disrupt production at Korean companies and in turn pose a threat to global supply chains.

Since July 4, Japan has adopted tighter export regulations on three key industrial materials that are crucial for the production of semiconductors, display panels and other electronic goods.

With the stiff regulations, South Korean chipmakers, such as Samsung Electronics Co., are feared to face output disruptions, and Korean-made chips and displays have been exported to the United States, the European Union and China for the production of high-end products, the FKI said in a statement.

As Japanese firms, including Sony, Panasonic and Toshiba, also import Korean-made chips and displays, they and the Japanese economy won't remain unscathed from a prolonged trade dispute between Seoul and Tokyo, according to the statement.

The FKI expected the bilateral trade valued at US$85 billion in 2018, and the number of Japan-bound Korean travelers that soared to 7.54 million in 2018 from 1.66 million in 2011 will decline, if Koreans expand a campaign against Japanese products and travel to Japan, it said.

Japan threatened to expand its export regulations down the road.

Tokyo's latest measure came amid a dispute over a court ruling in South Korea that ordered Japanese firms to compensate South Koreans for wartime forced labor. 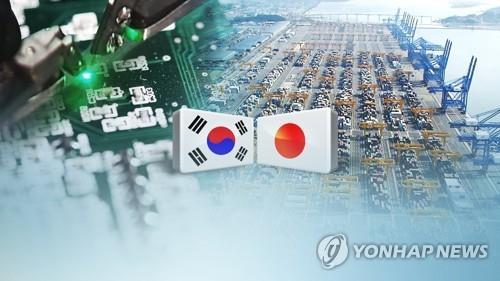