"I believe that it would be a just solace to the people for political leaders to put their heads together in a crisis," Hwang Kyo-ahn told a press conference at the National Assembly, adding he will accept whatever format of the envisioned meeting with the president, including one with the heads of the five ruling and opposition parties.

Lee Hae-chan, chief of the ruling Democratic Party, welcomed Hwang's proposal during a meeting of the party's Supreme Council members.

"We welcome his proposal to hold talks with the president, as he appears to have accepted a meeting that puts together the president and the heads of the five parties," Lee said.

The Japanese action has been seen as an apparent protest against Seoul over its handling of the wartime forced labor issue.

Hwang stressed the importance that "the issues inextricably needs to be resolved in a diplomatic way and the president should come forward to take care of it," asking Moon to dispatch a special envoy to Japan in a hurry.

During the press conference, Hwang demanded Japan lift the restrictions immediately, saying, "Our party sternly denounces Japan's economic retaliation that is hardly convincing and strongly asks it to retract the decision."

He also called for sending a special envoy and delegation to the United States as part of efforts to resolve the issue and dismissing Foreign Minister Kang Kyung-wha and presidential aides for diplomatic affairs to take responsibility for the export controls.

"What is important now is to restore the alliance among South Korea, the U.S. and Japan, and the establishment of the tripartite economic security community involving the three countries is a pressing task as our country competes in the global market," he said. 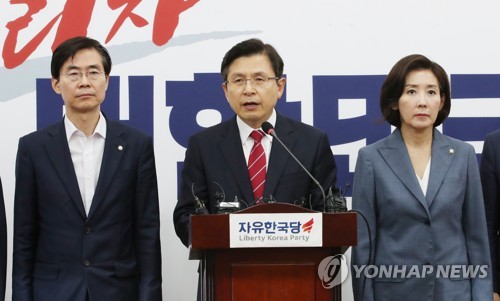