In a meeting with Prime Minister Sheikh Hasina in Dhaka on Sunday, Lee also said Korea will expand trade benefits for Bangladesh products to address a trade imbalance between the two countries.

Lee arrived in the Bangladesh capital Saturday for a three-day visit. He became the first South Korean prime minister to visit the country in 17 years.

"Economic cooperation between the two countries in the past centered on textile and garment sectors. We hope that cooperation will expand in the future to infrastructure, energy, information communication technology and other sectors," Lee was quoted as saying during the meeting.

Lee praised Hasina's leadership in achieving more than 6 percent economic growth every year for the past decade, his office said.

Hasina promised to foster a better environment for investment and businesses from foreign countries, including South Korea, calling the Northeast Asian country "an important partner for cooperation." 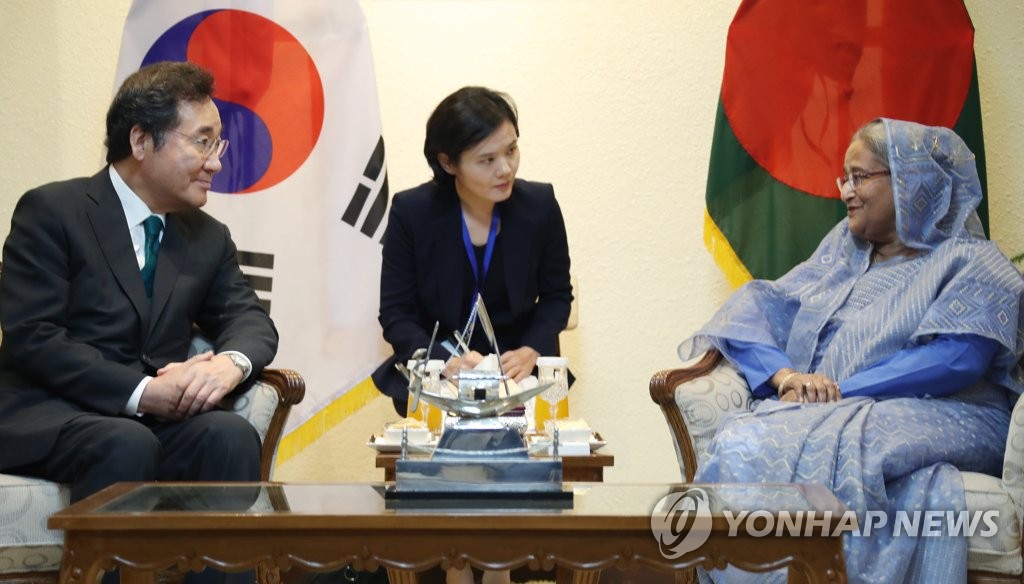 Trade volume between the two countries was $1.58 billion last year. Korea's exports and imports stood at $1.24 billion and $340 million, respectively.

She raised the trade imbalance issue and requested Korea to consider allowing the current duty-free and quota-free market access for all Bangladeshi products. Lee replied that Korea will expand such preferential treatment for Bangladesh, his office said.

Hasina also requested Seoul increase the number of Bangladeshis working in Korea under the Employment Permit System. Lee said the government will examine the issue in consideration of various factors, such as companies' needs. This year's quota for Bangladesh workers is 3,100.

During his three-day stay, he paid a courtesy call to Bangladesh President Mohammad Abdul Hamid, attended a Korea-Bangladesh business forum and met with volunteers of the Korea International Cooperation Agency.

On Monday, Lee will travel to Tajikistan, the second leg of his four-country trip, and later to Kyrgyzstan and Qatar until this Sunday.
(END)