The Supreme Court ruled last November that Mitsubishi must award up to 120 million won (US$101,600) each to 12 forced labor victims and their family members in two landmark rulings on forced labor cases. In March, a district court in Daejeon ordered the seizure of two trademark rights and six patents of Mitsubishi after the Japanese company refused to heed the top court's compensation order.

Lawyers of the victims had asked for consultations with Mitsubishi three times before launching procedures to dispose of its seized assets, according to the civic group dealing with colonial Japan's recruitment of Koreans for forced labor. 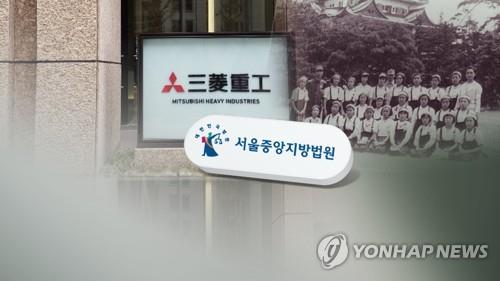 "The forced labor victims had sent a written request to Mitsubishi three times for consultations to resolve problems, finally demanding its reply by Monday. But Mitsubishi, apparently hiding behind the Japanese government, has ignored their request. It's regrettable that their efforts to seek reasonable solutions through dialogue for the sake of developing South Korea-Japan relations have failed," the group said.

It stressed that the legal procedures can no longer be delayed, particularly because of forced labor victims' deaths or failing health.

The group then vowed to file for an order to sell off Mitsubishi's assets in the earliest possible time, accusing the Japanese company of having even failed to express its regret by the deadline.

Korea was under Japan's brutal colonial rule from 1910-45. South Korea says Japanese leaders do not sincerely repent for the country's past wrongdoings and refuse to take full legal responsibility. Japan claims all reparation issues were settled in the 1965 treaty that normalized their diplomatic ties.

Diplomatic conflicts between the two countries have further escalated after Tokyo early this month removed preferential treatment for the export of three key materials used for the manufacturing of chips and smartphone displays to South Korean firms in an apparent protest against Seoul over its handling of the wartime forced labor issue.