The three-day visit by the assistant secretary of state for East Asian and Pacific affairs came amid rising tensions between Seoul and Tokyo over the latter's recent export restrictions, which are seen as a retaliatory step following last year's top court rulings here over Japan's wartime forced labor.

"The relationship between the United States and Korea is vital to stability and prosperity here in the region," Stilwell said upon arrival at Incheon International Airport, west of Seoul.

"Over the years, I have watched that relationship grow and thrive and expand as the Korean side gets stronger and more able to provide. I look forward to continuing that trend," he added.

Asked about the increasingly rancorous diplomatic spat between Seoul and Tokyo, he said, "I am going to think about that and I will be prepared to talk about those things tomorrow." 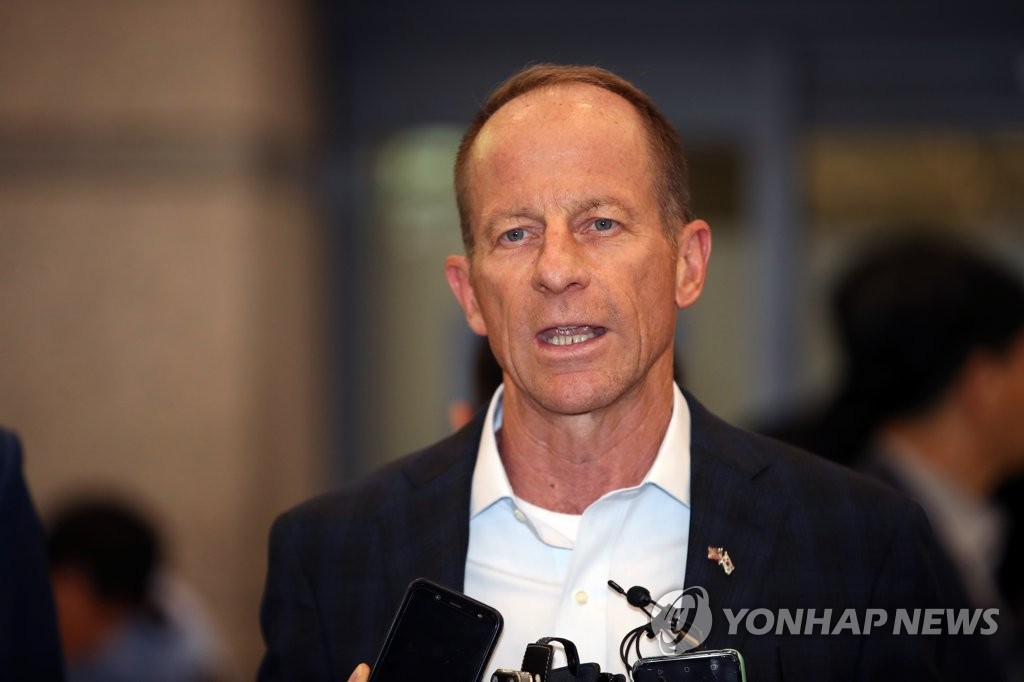 "During the meeting (with Stilwell), Minister Kang plans to call for the U.S.' active role related to the development of the South Korea-U.S. alliance, the denuclearization of the Korean Peninsula and a peace process, as well as regional situations," ministry spokesman Kim In-chul said during a regular press briefing.

Stilwell's visit renewed attention to whether Washington would step in to mediate an increasingly rancorous diplomatic spat between Seoul and Tokyo that was triggered by Japan's July 4 measure to tighten restrictions on exports to South Korea of three key industrial materials used in semiconductors and displays.

In an interview with Japanese broadcaster NHK last week, Stilwell said that the U.S. does not plan to mediate the dispute between its allies and called on the two sides to settle the issue through dialogue.

Before flying to Seoul, Stilwell visited Japan and the Philippines. His first Asia swing since taking office last month also includes a stop in Thailand.

A former Air Force brigadier general, Stilwell was officially appointed on June 20. Prior to his current post, he served in the Air Force for 35 years, beginning as an enlisted Korean linguist in 1980 and retiring in 2015 as the Asia adviser to the chairman of the Joint Chiefs, according to the State Department.