SEOUL, July 17 (Yonhap) -- The United States will do "what it can" to help resolve an increasingly rancorous diplomatic spat between South Korea and Japan, a senior American diplomat said Wednesday.

"The U.S. places a great priority on strengthening relations between our country and our two close allies between the ROK and Japan. The truth is, no significant issue in this region can be resolved without cooperation between our two allies," he told reporters. ROK stands for South Korea's official name, Republic of Korea.

"So fundamentally, ROK and Japan must resolve these sensitive matters and we hope that resolution happens soon. The U.S. as close friends and allies to both will do what it can to support their efforts to resolve (the situation)," he added. 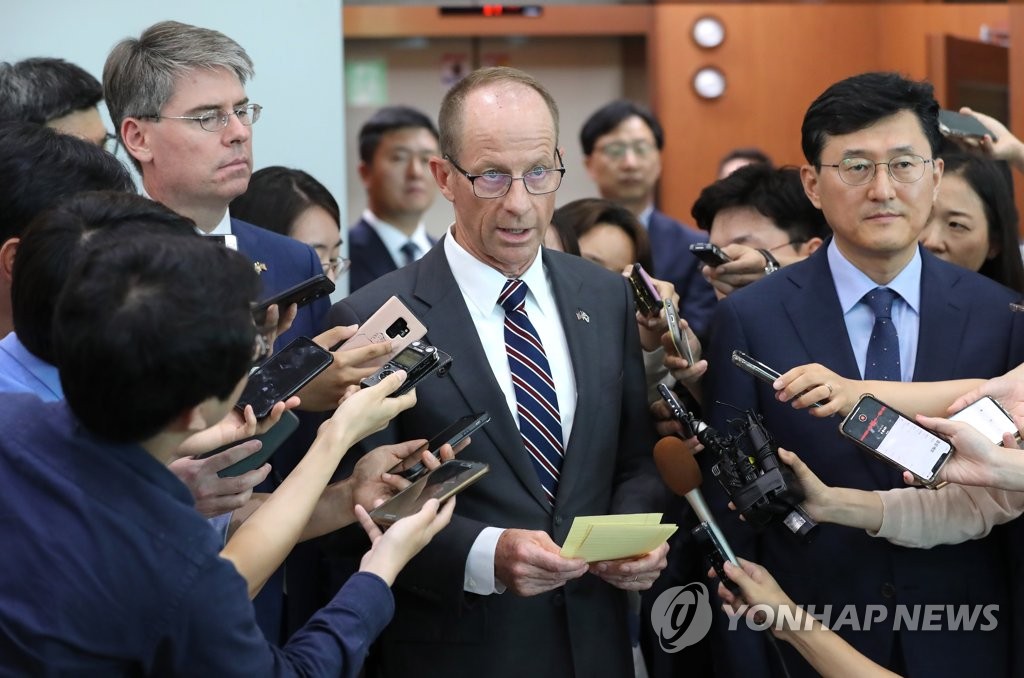 Stilwell arrived in Seoul on Tuesday for a three-day visit as part of his first Asia trip since taking office last month. His remarks came after a series of meetings with top Seoul officials, including Foreign Minister Kang Kyung-wha.

The already fraught ties between Seoul and Tokyo have been spiraling downward since Japan enforced tighter restrictions on July 4 on exports to South Korea of three key industrial materials used in semiconductors and displays.

The friction has caused concern among U.S. policymakers that have long called for stronger trilateral security cooperation with South Korea and Japan to promote regional stability.

Seoul sees Tokyo's export control measure as a tit-for-tat move in response to court rulings that ordered Japanese firms to compensate Korean victims of forced labor. Tokyo argues that all reparation issues, stemming from its 1910-45 colonization of the peninsula, were settled under a 1965 treaty on normalizing bilateral ties.

"We discussed how we are going to turn our natural convergence between our Indo-Pacific strategy and the New Southern Strategy, which we discussed, and take advantage of the overlaps and opportunities they present," he said.

Washington has been pushing its Indo-Pacific Strategy to capitalize on its alliance network to deepen regional engagement and protect global commons in maritime and other domains and to promote what it calls the rules-based order.

Seoul has been pushing its own strategy to deepen ties with the Association of Southeast Asian Nations and India.

In the morning, Stilwell first met Kim Hyun-chong, deputy director of the presidential National Security Office, and then Seoul's top nuclear envoy, Lee Do-hoon, both at the foreign ministry.

Later in the day, he met Deputy Foreign Minister for Political Affairs Yoon Soon-gu and paid a courtesy call on Minister Kang.

Kang voiced her expectation for Stilwell's role as "bridge and communication channels" between the allies.

"It certainly helps to have an interlocutor who can really play a role of a bridge and communication channels between the two sides," she added, referring to Stilwell's Korean language skills.

In a separate meeting, Yoon voiced concerns over what he called Tokyo's "unilateral" measure and called for the U.S. to help swiftly settle the dispute between its allies, the ministry said.

"Regarding the Japanese government's unilateral export restriction, Deputy Minister Yoon expressed concerns that Japan has taken a unilateral measure that is not helpful for an improvement of the situation while not responding to the proposal by our side that has been exploring a resolution through dialogue," the ministry said in a press release.

Stilwell said in turn that the U.S. "sufficiently understands the seriousness of the matter," the ministry added.

The two sides also shared the understanding that there are "very big possibilities" for cooperation between the Indo-Pacific Strategy and the New Southern Policy.

In addition, Yoon said that a "positive environment" has been created for the resumption of dialogue with the North since U.S. President Donald Trump's trip to Seoul last month, during which he met North Korean leader Kim Jong-un at the Demilitarized Zone.

Some observers said that Stilwell could make a request for Seoul to join the U.S. initiative to form an international military coalition to ensure free navigation in the strategically crucial Strait of Hormuz off Iran. But a foreign ministry official said that there has been no concrete request related to the envisioned coalition.

Before his trip to Seoul, Stilwell visited Japan and the Philippines. His Asia tour also includes a stop in Thailand.

A former Air Force brigadier general, Stilwell was officially appointed on June 20. Prior to his current post, he served in the Air Force for 35 years, beginning as an enlisted Korean linguist in 1980 and retiring in 2015 as the Asia adviser to the chairman of the Joint Chiefs, according to the State Department.

(7th LD) U.S. will do 'what it can' to help resolve Seoul-Tokyo row: senior diplomat

(7th LD) U.S. will do 'what it can' to help resolve Seoul-Tokyo row: senior diplomat