(ATTN: UPDATES with additional remarks from BOK chief in paras 21-24)
By Byun Duk-kun

SEOUL, July 18 (Yonhap) -- The Bank of Korea (BOK) cut its policy rate by a quarter percentage point to 1.50 percent Thursday in a surprise move to help spur growth as a trade feud with Japan adds more uncertainty to Asia's fourth-largest economy already dogged by a decline in exports and facility investment.

The rate cut, the first since June 2016, underscores the need to help the economy deal with a series of headwinds, including a trade tussle between the United States and China, and more recently, its own feud with Japan over the latter's export restrictions.

The central bank had kept the rate frozen since November, when it raised the rate by 25 basis points to 1.75 percent.

Given worsening conditions at home and abroad, the BOK also lowered its growth outlook for the year to 2.2 percent from the 2.5 percent projected three months earlier.

The unexpected rate cut follows seven consecutive months of decline in the country's exports, which could face further downward momentum in the future due to Japan's export curbs on key materials for the production of semiconductors and display panels, both key export items of South Korea.

Amid the steady decline in its exports, the economy contracted 0.4 percent from three months earlier in the first quarter.

BOK Gov. Lee Ju-yeol earlier hinted at a possible rate cut, highlighting the need for what he called "appropriate measures to accommodate changes in economic conditions."

The bank's monetary policy board highlighted the need to accommodate growth, noting the country's economic growth is expected to further slow.

"With respect to future domestic economic growth, the Board expects that the adjustment in construction investment will continue and exports and facilities investment will recover later than originally expected," it said in a statement. 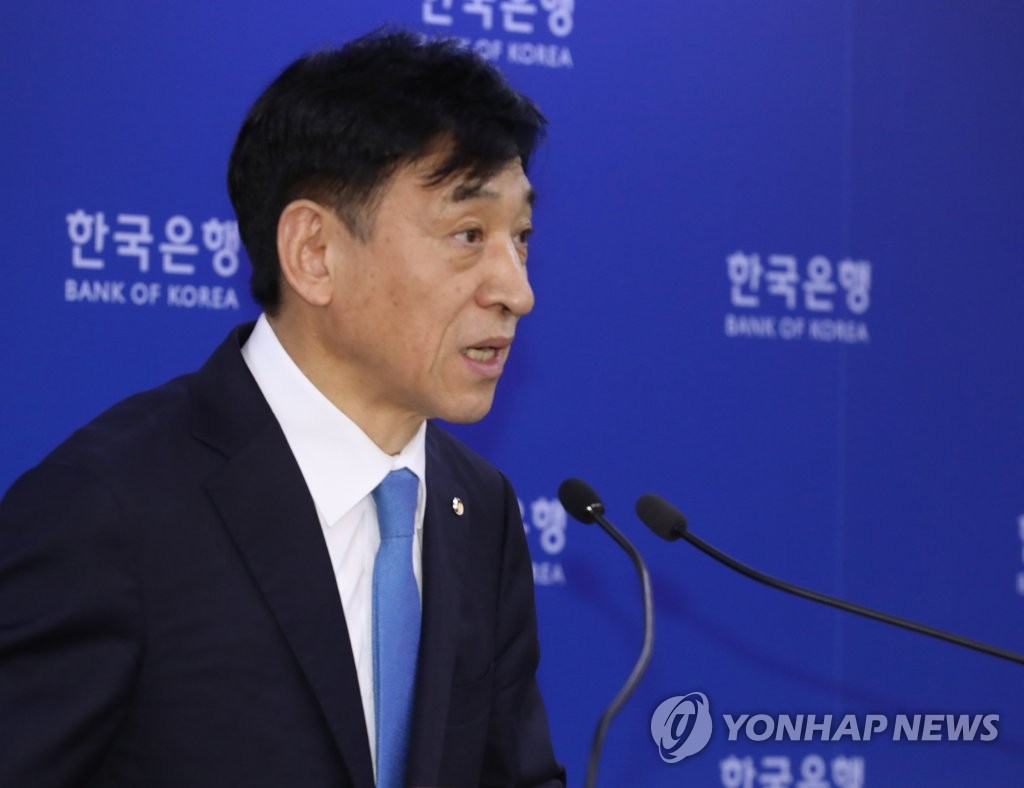 The BOK chief said the central bank has slashed its growth outlook to 2.2 percent for the year, down from the 2.5 percent forecast three months earlier and January's 2.6 percent prediction.

"The monetary policy board determined that the country's economic growth and inflation will be slower than earlier expected," Lee told a press conference.

"The Bank of Korea has offered a (revised) growth outlook of 2.2 percent, and sluggish exports and investment were major reasons behind the down revision," he added.

The decision to cut the key rate also follows a series of downward revisions in the growth outlook for the local economy.

The government revised down its growth forecast to between 2.5 percent and 2.6 percent earlier in the month from the 2.6 percent to 2.7 percent forecast in December.

Still, the rate cut may come as a surprise to many who expected the central bank to wait at least until the U.S. Fed lowers its own rate.

In a survey conducted by Yonhap Infomax, the financial news arm of Yonhap News Agency, eight of the 13 experts polled expected the BOK to keep its policy rate intact in July.

All 13 of them had anticipated the central bank would slash the policy rate next month instead.

South Korea's policy rate was already lower than that of the U.S., which currently sits in a range of 2.25 percent to 2.5 percent.

The gap between the policy rates of South Korea and the U.S. has now widened to 1 percentage point, which could cause an outflow of foreign investment from the local market in the future.

The U.S. Fed has hinted at a possible rate cut at its next rate-setting meeting, slated for July 30-31.

"Global financial markets have been stable in general, with stock prices in major countries increasing primarily in line with expectations of monetary easing in major countries," the BOK said in its statement. 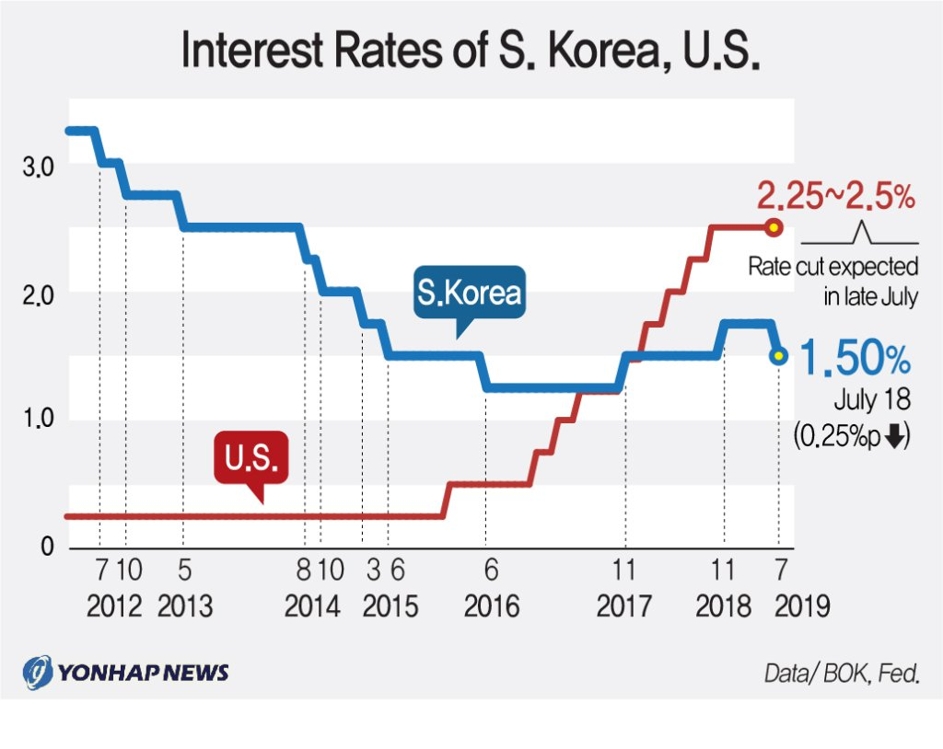 Lee underscored a possible need to further slash the country's policy rate, pending on how Japan's export restrictions on key IT materials unfold.

"Japan's export restrictions will certainly have an adverse effect once they are actualized," he said.

"It is difficult to put (the adverse effect) in numbers because it is hard to predict how strong the restrictions will be and in what way. Still, the BOK will make thorough preparations to take any necessary measures should there be any," Lee added.

The BOK chief noted that Thursday's rate cut may have left the central bank with less space to maneuver, given the wider gap with the U.S.' policy rate, but insisted the key rate is still away from what could be called a "de-facto low ceiling."

"A de facto low ceiling can in fact vary, depending on what it is based on, for instance the possibility of a fund outflow. The rate cut did reduce our room for additional monetary policies, but we still maintain room to take measures depending on changes in economic conditions," he said.